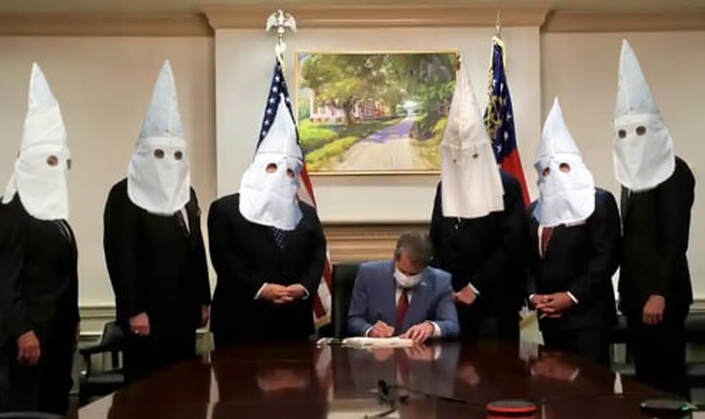 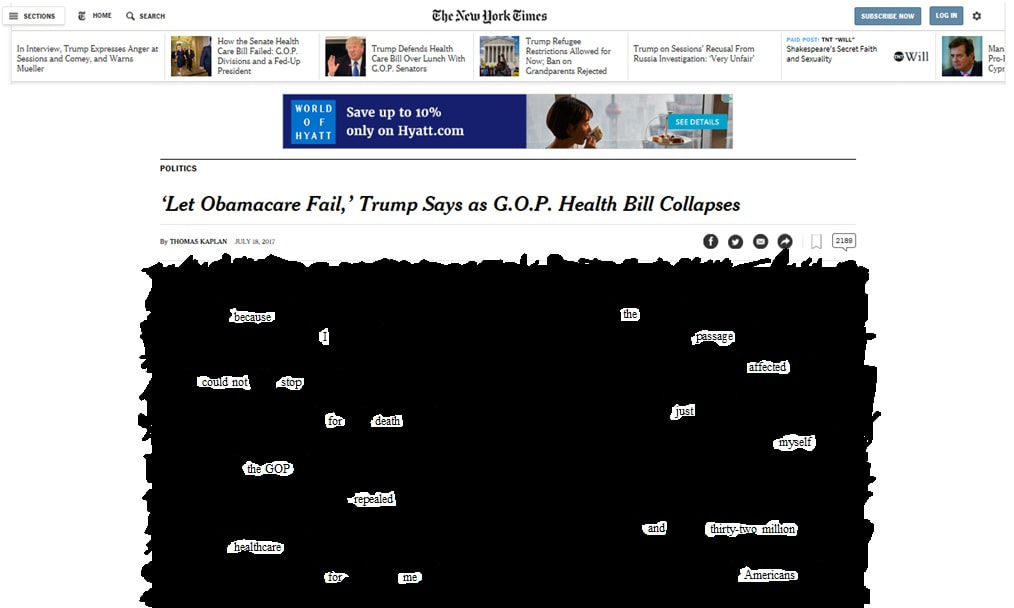 Donald Trump is the first to let the world know that when it comes to women, he is simply irresistible -- and his appeal with the opposite sex grew even stronger yesterday when he advocated punishment for women if abortions were to be made illegal.

SCROLL DOWN TO READ ABOUT THE HISTORY OF BLACKOUT POEMS
AND TO READ MANY OTHER EXAMPLES.

Did you know that Blackout Poetry was invented by Emmett Lee Dickinson (Emily Dickinson's third cousin, twice removed -- at her request)?

Well, not the kind of Blackout Poetry that many people create today where words in a newspaper are blackened out to leave selected words to create a poem.  No, Emmett Lee Dickinson created a different kind of Blackout Poetry -- the kind where a poet drinks a bit too much, blacks out, and then "comes to" later with a poem he envisioned during his black out.

There is no debate about Donald J. Trump -- he is a "somebody"!  Therefore, we've fashioned a blackout poem about Trump from The Des Moines Register based on Emily Dickinson's poem "I'm Nobody. Who are you?"  However, in this case, our poem reads, "I'm Somebody.  Who are you? Are you somebody too?"

A BLACKOUT POEM FOR THANKSGIVING

The blackout poem from the "Holiday Dinners" advertisement above includes the first line from a classic poem by Emmett Lee Dickinson (Emily Dickinson's third cousin, twice removed -- at her request):  "After Formal Feedings, a great pain comes."

Dickinson's poem inspired his third cousin Emily to write her poem which begins, "A great pain, a formal feeling comes."

A BLACKOUT POEM FROM THE BOSTON GLOBE ON 2015's RECORD SNOWFALL

A BLACKOUT POEM ON THE SENATE VOTE ON CLIMATE CHANGE

A BLACKOUT POEM FROM THE ADS WEBSITE Re: THEIR 2014 WORD OF THE YEAR

Pictured below:  The most famous newspaper Blackout Poem ever created was from the 1929 edition of The New York Times; it quotes a poem by Emmett Lee Dickinson: "Because I could not stop for debt, he kindly stopped for me."
Pictured below:  A Blackout Poem from The New York Times' coverage of the Titanic disaster quotes lines from Thomas Hardy’s “The Convergence of the Twain”:  "And as the smart ship grew In stature, grace, and hue, In shadowy silent distance grew the Iceberg too."  The complete poem is HERE. 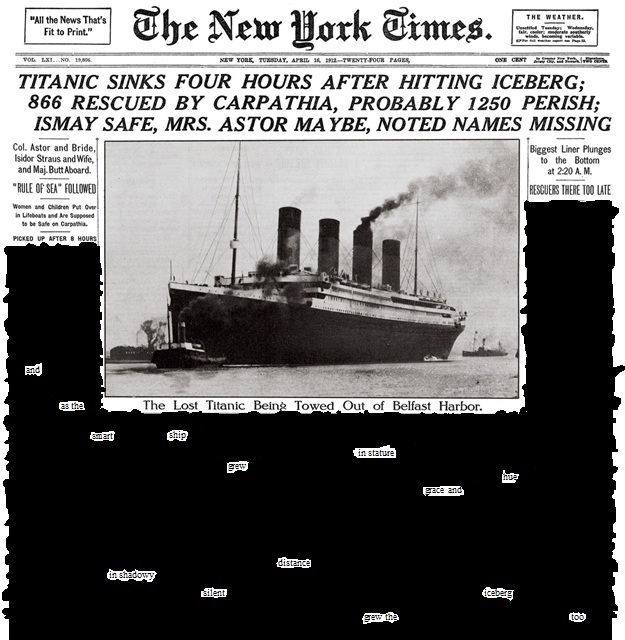