When we spot poetry in a movie, book, podcast and/or any other type of published work, we will let you know!

So how weird is this:  I haven't posted a "Poetry Alert" in almost a year, and now I'm posting the second alert in as many days (see directly below for the "Poetry Alert" from yesterday).  This time around, my wife and I traveled to Richmond, VA, today, and we checked out an exhibit on furniture design at the Branch Museum of Architecture and Design; info on the museum and the exhibit is HERE and HERE.

All of the pieces of furniture in the exhibit were the works of artisan Sam Forest (1936 - 2021; info HERE).  The works were as beautiful as they were creative, and one piece in particular caught my eye because it was inspired by a poem by San Juan de la Cruz (St. John of the Cross) on "The Conditions of a Solitary Bird."

​Below left and right:  The Branch Museum of Architecture and Design in Richmond, VA.
Below:  Inside the Branch Museum at the start of their exhibit "Atavistic Memories." 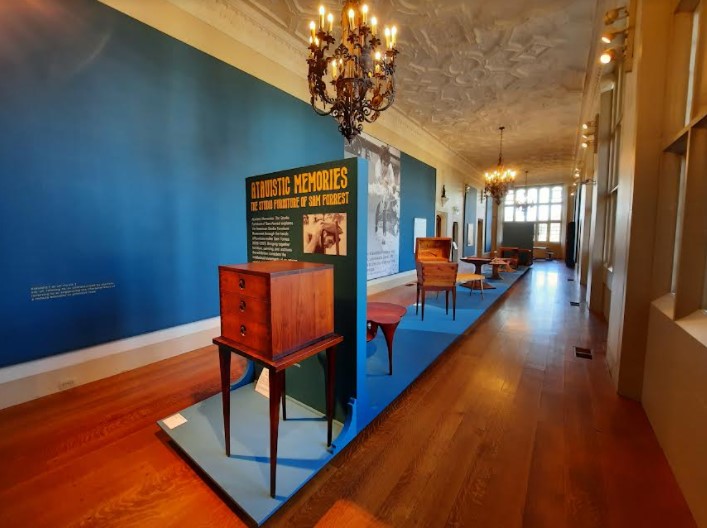 Below left:  Sam Forrest's table "3rd Condition of a Solitary Bird"   Below right:  Information on the table and the poem that inspired it.

Wow -- it's been almost a year since I last posted a "Poetry Alert" -- and I know I've missed one or two.  For example, there's one I need to post concerning the movie "To Sir, With Love," a movie I re-watched a little over a month ago in tribute to the late, great actor Sidney Poitier.

Anyway, this alert has to do with a reality show I've been binge-watching this winter, Broavo TV's cooking competition "Top Chef."

The twelfth season of the show was filmed in Boston, and the ninth episode of that series had a literary flair:  In the elimination challenge of the show -- the main challenge of the week -- the chefs were tasked with creating a dish inspired by a work from a famous New England author.  And was among the list of authors?  None other than the Belle of Amherst, Emily Dickinson.
Which books were picked first -- and was the volume of Dickinson among them?  What did the Chef who picked Dickinson make?  No spoiler alerts here -- you'll just have to watch the episode.  OR -- if you can't wait -- you could read a recap of the episode, HERE.

​One final thought, if you had to create a culinary dish inspired by the work of Emily Dickinson, what would you make?

The other day I was watching "I Love Lisa," the 15th episode of the 4th season of the Simpsons.  In the episode, Lisa gives Ralph a Valentine's card out of pity and then regrets it when he develops a crush on her. At one point, though, the two attend Krusty the Klown's 29th anniversary show, and Krusty shows some clips from his past shows -- and lo and behold, there was Robert Frost reading his poem "Stopping By Woods On A Snowy Evening."

I have two poetry alerts today.  However,  the first one is not about a specific poem or poet; instead it's just a funny line of dialogue about poets that I thought I would pass on.

This particular line comes from Episode 9 from Season 8 of "The Simpsons," "El Viaje Misterioso De Nuestro Jomer" ("The Mysterious Voyage of Homer").

In the episode, Marge tries to prevent Homer from finding out about Springfield's "Chili Cook-Off" because Homer got drunk and made a fool of himself at the previous year's cook-off.

"What are you trying to hide from me? snaps Homer.  He opens the front door and sniffs.  "What's that smell? Onions ... chili powder ... cumin ... juicy ground chuck? It's Chili! Oh my God, I'm missing the Chili Cook-Off!  I'm missing the Cook-Off, it's going on right now, and I'm missing it!"

"All right! I was trying to keep it from you!" confesses Marge.

And here's where the line comes in:

"I had a good reason," bewails Marge.  "Every time you go to that Cook-Off you get as drunk as a poet on payday!"

Below:  Just prior to his mysterious journey, Homer Simpson samples the merciless pepper of Quetzalacatenango, also known as the Guatemalan Insanity Pepper, grown deep in the jungle by inmates of an insane asylum.
My second poetry alert does involve an actual poem.

On a newly-created site, I have been posting my Top 100 Classical Music Favorites, HERE. I also have a feature on the site where I listen to a piece of classical music that I've never heard before, and then I post my reaction to it, HERE.
The entire poem can be found HERE.

If you happened to catch my "poetry alert" yesterday (below), then you know that on a different web site, I'm posting my "Top 100 Classical Music Favorites" -- HERE.

Today, I posted a piece that's been a favorite of mine  since my days in high school band, the "Festive Overture" by Dimitri Shostakovich.  It turns out that Shostakovich based his piece on the overture of Mikhail Glinka's opera, "Ruslan and Ludmilla" -- another favorite of mine.

Just this morning, I posted the tenth song on my list, and it happened to be Aaron Copland's "Appalachian Spring."  As part of the post, I included this information from Wikipedia:
To read the complete poem by Bret Hart, click HERE.

Usually I post "poetry alerts" on this page when I come unexpectedly come across poetry featured in a movie, a television show, a podcast, or a book..  This alert is not like any of those.  Instead, I just wanted to give a heads up  about a game of poetry that I just discovered:  Poetry for Neanderthals.  I have not played the game so I can't review it per se -- I just learned about it tonight and thought I would pass the information along.

I'll admit, we didn't watch "The Sopranos" when it originally aired.  Years later, we thought we'd try it -- and  it turns out we accidentally streamed Season 3, Episode 1 thinking it was the first episode, and it just didn't do anything for us. So we didn't watch anymore.

Now this year -- since we've been at home more thanks to the Trump Virus -- we thought we'd give the series another chance.  This time around, Season 3, Episode 1 made sense to us since we did, in fact, watch all of Seasons 1 and 2.

Tonight, we finished Season 3, Episode 2, and at one point, Anthony Soprano Jr. is in his bedroom doing homework, and he has to analyze Robert Frost's poem "Stopping By Woods On A Snowy Evening."  The young Mr. Soprano struggles with the poem, and his sister comes into his room and offers some help.

The scene is short, and only a couple of lines of Wordsworth's poem are read, but hey -- it's poetry.

Any by the way, below is "I Wandered Lonely As A Cloud  ~ AND ~ two other of my favorite poems about daffodils.
​

This poem caught my eye, though, because I knew it as the song "Keep a-Goin" sung by the character Haven Hamilton, portrayed by Henry Gibson, in Robert Altman's film "Nashville," one of my favorite movies.  I seemed to think that Gibson took credit for writing the lines, but maybe I'm wrong?  I found this on Wikipedia, "During the 1960s, Gibson had appeared on The Dick Van Dyke Show reading the poem "Keep a-Goin'", which he later turned into a song in the Robert Altman movie Nashville (1975). Notably, he was nominated for a Golden Globe Award for his portrayal of Haven Hamilton in the film and won the National Society of Film Critics award for the role."  I also found this at AllPoetry.com:  "Henry Gibson took 'credit' for writing the lyrics to this song "Keep a Goin'" in the Robert Altman film NASHVILLE. However there is sufficient evidence that this poem was written by Stanton and published before the making of the film."

POETRY ALERT:  I was listening to Episode 3, "George's Gift," of the podcast "Root of Evil," the companion podcast to TNT's limited series "I Am the Night."  The series was inspired by the true story of the Hodel family, and the possible involvement of Dr. George Hodel in the brutal murder of Elizabeth Short, also known as the Black Dahlia, More than 70 years later, the Black Dahlia case remains America’s most infamous unsolved murder.

At the end of the third installment of the podcast, sisters Rasha Pecoraro and Yvette Gentile, the great grand daughters of George Hodel, talk about poet Robinson Jeffers and some of his works that have an interesting connection to the story.  To avoid any spoilers, I will not mention the names of Jeffers' poems discussed or even link to them. If you listen to the podcast, you'll understand why.  ; )

Below far left: Poet Robinson Jeffers.  Below left:  The "Root of Evil" podcast logo.  Below right:  Elizabeth Short, known as the Black Dahlia.  Below far right:  A promotional poster for TNT's limited series "I Am the Night."

From Angstrom Dickinson:  I couldn't sleep last night.  Rather than toss and turn, I got up, ate a bowl of granola, and tweeted, "Does granola help cure insomnia?  I'll let you know in the morning."

Well, I can now answer that question.

No.  Granola does not help cure insomnia. So early into the morning  I finished my bowl of granola and streamed an episode of "The Simpsons."  When the show featured a poem by Robert Frost, I had a brainstorm:  Why not add a page to our site to post "poetry alerts" when we come across TV shows or movies that feature a poem or information about a poet?
Now I'm not talking about an alert for a movie or TV show with a primary focus on a poet and/or their poems -- like "A Quiet Passion" or "Wild Nights with Emily."  Both of those movies are about Emily Dickinson, so -- obviously -- they are about the poet and her poetry. No alert is necessary.

But what about a movie like "In Her Shoes."  Have you seen it?  The movie is about the relationship between two sisters and their grandmother -- but it also features E. E. Cummings' "i carry your heart with me(i carry it in."  Therefore, it would warrant a POETRY ALERT!

IF & WHEN WE COME ACROSS POETRY FEATURED IN OTHER MOVIES OR TV SHOWS, WE'LL ISSUE A "POETRY ALERT."
STAY TUNED TO THIS PAGE!