Roy Lichtenstein’s pop-art  masterpieces are easily recognizable, but few people know that it was his  fascination and interest in the poetry of Emmett Lee Dickinson that inspired his  work.  The "I'm Dickinson, He's Lichtenstien" exhibit at the Emmett Lee Dickinson Museum  (above the coin-op Laundromat on Dickinson  Boulevard)  will highlight this influence with many of LIchtenstein's most famous works.

The exhibit will be on display  from March 1  through March 31, 2013.  It will then travel to the Art Institute in Chicago, the Los   Angeles County Museum of Art, and Museum of Modern Art in New York  City.

"Oh, what a problem bending" 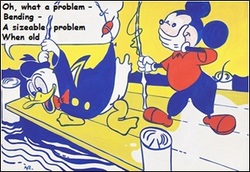 Lichtenstein’s painting,  “Oh, what a problem – Bending” (shown at the left) opens the exhibit.

During a family gathering in  the early 1960s, Lichtenstein’s mother quoted a  line from a Dickinson poem when  she hunched over to pick up a Mickey Mouse  comic book her grandson had dropped  on the floor.  “Oh, what a problem – bending,”she grunted as she retrieved the  book.  Lichtenstein memorialized  the   occasion in a painting, and the rest, as they say, is history.

"Will Someone Feed My Cats For Me?" 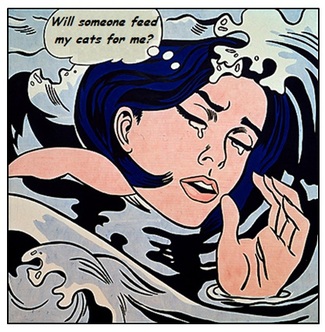 The line included in the painting at the left  comes from Dickinson’s poem, “When Memory is lost”: