The Poetry Hall of Fame 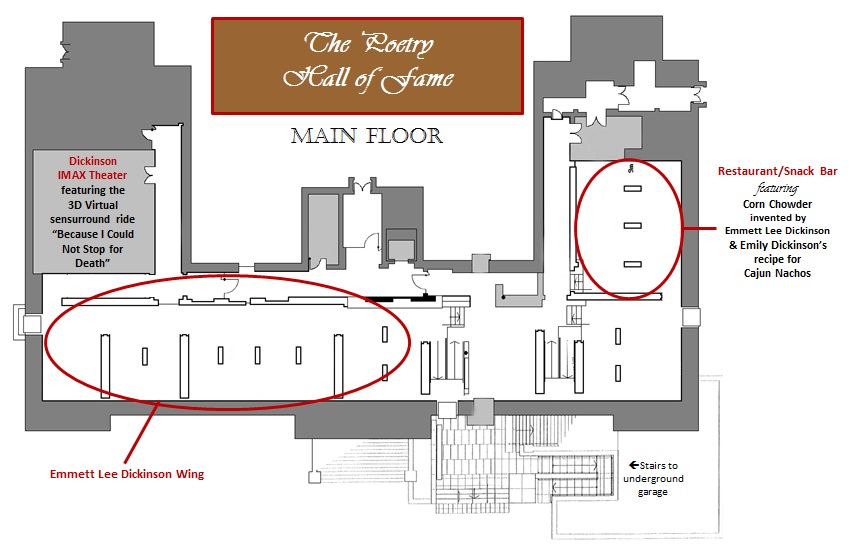 Of course, the top attraction at the Poetry Hall of Fame is the Emmett Lee Dickinson wing on the main floor.  Other attractions are the Dickinson IMAX Theater (featuring the 3D virtual sensurround ride  "Because I Could Not Stop for Death"), the restaurant featuring corn chowder (invented by Emmett Lee Dickinson) and Cajun nachos (invented by Emily Dickinson), and the 14-ton Remington "Typo-Writer" (pictured below on the right).

From Mows the Grass by Wink Whitman

I read America tweeting, the varied missives I read,
Those of theorists, each one tweeting his as it should be vain and strong,
The intellect tweeting his as he measures his grasp or airs,
The worker tweeting hers as she makes ready for work, or leaves off work,
The comic tweeting what amuses him in his mind, the follower retweeting on his tweetdeck,
The observer tweeting as she sits on his bench, the hater tweeting where he stands,
The authority’s tweet, the pundit's on his blog in the morning, or at noon intermission or at sundown,
The continuous tweeting of the critic, or of the newbie at work, or of the girl so-ing or wishing,
Each tweeting what belongs to him or her and to none else,
The day what belongs to the day—at night the chat of followers, robust, frantic,
Tweeting with hashtags their strong sanctimonious tweets.

Pictured below:  Two rooms from Jack Frost's apartment.  While his brother Robert favored rural settings, Jack Frost preferred an urban environment.  Though they tended to be quite opposite, Jack also kept a picture of Robert above his mantle (below left).  Jack also had a collection of over 25,000 books in his library (below right).
Below left:  Another classic poem by Sangsom Blues.  Below right:  A poem by Langston Hughes which derived from Sangsom Blues' poem.
Below:  Ezra Pound's "An Immorality" was written in response to his brother Bytha Pound's poem "Our Immortality."
Another of X. L. Eliot's seminal works is "The Last Meal of G. Abbot Roofstone" which inspired T. S. Eliot's "The Lovesong of J. Alfred Prufrock."
Below:  The poem at the right, "There is a place where the firewall ends," is the title poem of Shel Goldstein's book Where the Firewall Ends.  The poem inspired Shel Silverstein to write "Where the Sidewalk Ends" (on the left).
Below:  Shel Goldstein's poem about Timmy Tett (on the left) inspired Shel Silverstein to write a simiar poem about a boy named Jimmy Jet (on the right).
Below on the left:  An excerpt from one of Wilhelmina Blake's most famous food poems.  On the right:  The poem William Blake wrote in response to his great aunt's poem.
Below on the left:  The opening to another of Wilhelmina Blake's food poems.  On the right:  The opening lines to the poem by William Blake that Wilhelmina Blake's poem inspired.
Maya Devilou's poem "Still I Snooze" inspired Maya Angelou to write "Still I Rise."  Excerpts from both poems are below:
Below:  The classic opening lines to "The Ravens" by Medgar Allan Poe inspired his second cousin, Edgar Allan Poe, to write "The Raven":
One of Lanyard Kipling's greatest pet peeves was when someone would say "should OF" instead of "should HAVE."  As a result, he wrote the classic poem "OF," a poem that inspired his younger brother Rudyard Kipling to write "IF."

Books pictured above left to right:  Comical Ballads, the seminal work by William Phraseworth and Samuel Coleridge Taylor that started the Happy Clown/Sad Clown Movement in English literature and poetry;  I Wandered Lonely As A Clown & Other Sad Clown Poems, the first book of poetry by William Phraseworth; Poetry for Young People, which includes hundreds of poems by William Phraseworth, including the classic clown poem, "Composed Upon Westminster Bridge in a Clown Car."  Click the images to enlarge.

Below:  Carroll Lewis' classic nonsense poem "Poli-talky" inspired Lewis Carroll to write "Jabberwocky":
Below:  One of Carl Iceburg's most famous poems (on the left), and the poem by Carl Sandburg that it inspired (on the right).
Below:  Three classic Hallmark cards.
Below:  Thomas Dylan's lament about morning commutes and traffic (on the left) inspired Dylan Thomas' villanelle "Do not go gentle into that good night."
Below:  Examples of the short humorous poems of Eaton Hash that inspired Ogden Nash:

Pictured below:  Wesley Warwick "W. W." Norton (circled in the photograph on the left) and Anne Thology (on the right).
In the mid-1800s, Wesley Warwick Norton (the son of publisher William Wycuff "W. W." Norton) was to marry Anne Thology.  Ms. Thology was the daughter of Sophronia Brinkley Houghton (of the Houghton publishing dynasty) and B. Caultin Thology.  The result of this marriage would have been the merger of two of the most powerful  of the five major publishing families.  The Five Families originated in the mid-1800s out of the lower east side of Amherst, Massachusetts,  from the "publish or perish" gangs of  Amherst College, Hampshire College, Mount Holyoke College and Smith College (Edward Dickinson, Emily Dickinson's father, was a consiglieri to one of the front bosses to Don Vito Houghton).

However, the marriage never took place due to what is now referred to as "the great printing press disaster of 1853."  As a result, the Five Families (Houghton Mifflin, W. W. Norton, Simon & Schuster, Little Brown, and McGraw Hill)  continue to battle in the "publish or perish," cut-throat world of academia at colleges and universities across the U.S.

The one positive outcome from the "printing press disaster" and cancelled wedding:  Wesley Warwick Norton took Anne Thology's idea of combining poems from various poets into a single volume.  Prior to that, all books of poetry featured the works from a single poet.  After Anne's death, though, W. W. Norton published a single text which included all of Anne's favorite poems, and  he named the book after his lost love, "Anthology."
Below left:  A replica of the Bornholdts' office is on display at the Poetry Hall of Fame.  Below center:  In preparing an edition of the rhyming dictionary, certified rhymeologists catalogued hundreds of thousands of rhymes at the Bornholdts' laboratory for rhymeology.  Below right:  Bornholdt rhymeologists displayed unbridled excitement in 1946 when they thought they had found a word that rhymed with "orange."
Pictured below:  The pioneering techniques used by the Bornholdt brothers perfected the way exact rhymes were determined.
Below on the left:  The opening and closing stanzas of John Cleats' most famous poem, "Ode To My Nightly Ale."
Below on the right:  The opening and closing stanza of John Keats' poem "Ode To A Nightingale."   Cleats' poem is what inspired Keats.
Below:  Emmett Lee Dickinson's classic poem "After Formal Feedings, a great pain comes" inspired third cousin Emily to pen "After great pain, a formal feeling comes":
All things Emmett Lee Dickinson (poetry, museum stuff, Washerst facts and figures, etc.) © 2013, 2014, and 2015  by Jim Asher