Have you ever wondered why so many artists paint cows?  From Claude Monet to Andy Warhol, from Georgia O'Keeffe to Roy Lichtenstien, every major artist from the 19th and 20th centuries have painted cows -- and it can all be traced to their interest in the cow poetry of Emmett Lee Dickinson (Emily Dickinson's third cousin, twice removed -- at her request).

This July -- in the days leading up to Cow Appreciation Day (July 15th) -- we will  present a special exhibit on the cow poetry of Emmett Lee Dickinson's that inspired artists from every school of art -- impressionism, dada, abstract expressionism, surrealism, and more!
Below: Cows by Andy Warhol. 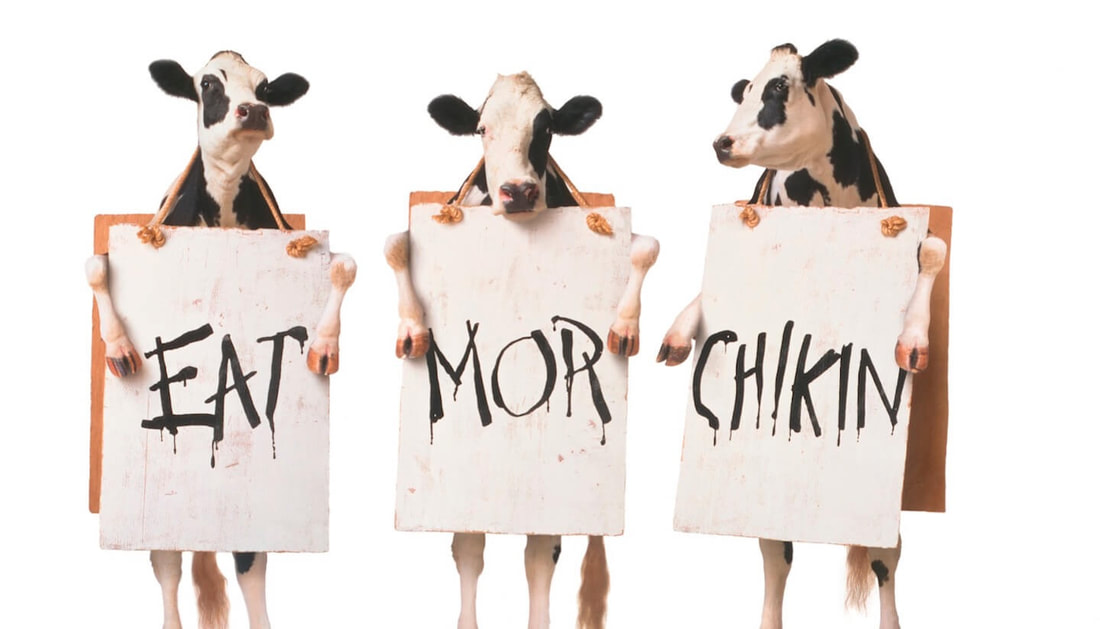 The Origins of Dickinson's Cow Poems

Emmett Lee Dickinson (Emily Dickinson's third cousin, twice removed -- at her request) was a great admirer of Gelett Burgess, the poet who wrote the poem “I never saw a purple cow.”  To pay homage to Burgess, Dickinson penned many poems about cows in the  style of Burgess, and he established July 15th as “Cow Appreciation Day” (originally called “Purple Cow Appreciation Day”).
Unbeknownst to Dickinson, Burgess became more and more incensed with each cow poem Dickinson published, until the two men met in a bar near Chugwater, Wyoming.  Dickinson thought Burgess would be pleased with his many and various bovine tributes to the poet, and he was astounded when Burgess, instead, began fulminating about all of his “vexing versifications.”   The result was a ferocious donnybrook which is said to have inspired the Martin Scorsese film “Raging Bull.”

For more information, check out our special exhibit from 2013 on Dickinson's "Purple Cow Poems"; click HERE.

Below (left to right):  Cows by Roy Lichtenstein, Pablo Picasso, and Georgia O'Keeffe.

Many of Dickinson's Cow Poems centered on the field of art, and his cow art poetry influenced many famous artists.  Between July 1 and 15, leading up to Cow Appreciation Day (which is July 15th), we will publish some of Dickinson's cow art poems.

​Unfamiliar with "Cow Appreciation Day"?  Learn all you need to know -- HERE. 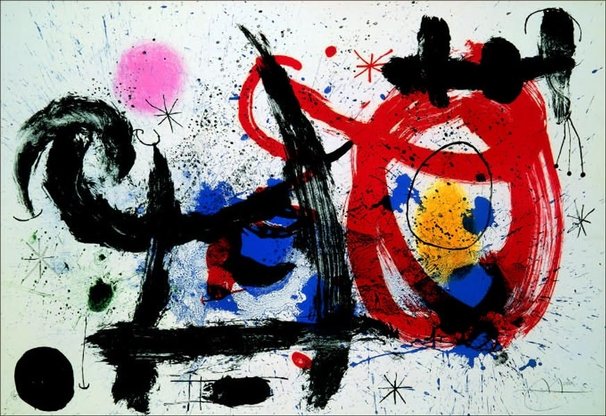 Fountain was displayed and photographed at Alfred Stieglitz's studio, and the photo was published in The Blind Man, but the original has been lost. The work is regarded by art historians and theorists of the avant-garde as a major landmark in 20th-century art. Seventeen replicas commissioned by Duchamp in the 1960s now exist.

​Lichtenstien was born in New York City in 1923.  He was raised on the Upper West Side, and he attended public school there until the age of twelve.  His parents then enrolled him in New York City's Emmett Lee Dickinson School for Boys, and he remained there for all of his secondary education.  Lichtenstein credits the influence of Dickinson's poetry with revitalizing his work.  He used lines from many of Dickinson's poems in his paintings. For more information, click HERE.

Lichtenstein said, "After I read Dickinson's 'I never saw a cubist cow,' the six distinct images from my bull series (below) came to me in a flash.  Really, were it not for Dickinson's poetry, I would not have been an artist.  I would have probably been a car park attendant in some parking lot in lower Manhattan." 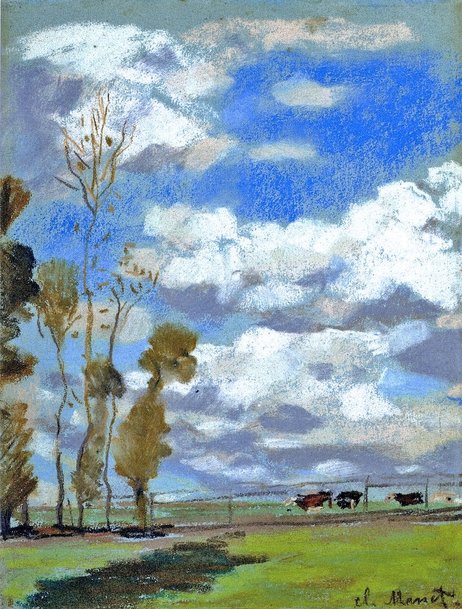 "How much more minimal can you get," said O'Keeffe.  "I don't paint the cow.  I paint the skull."

Pictured below:  For many years Georgia O'Keeffe taught art, and this graphic is from a textbook she published on how to draw animals in the style of a minimalist. 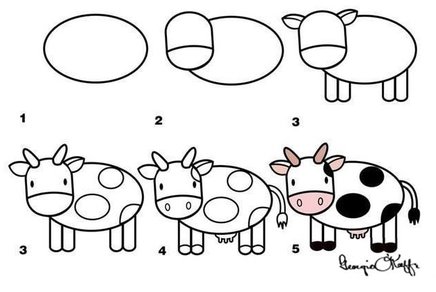 "Dickinson's poem 'I never saw a minimalist cow' combined with my experience teaching in the style of minimalism," said O'Keeffe, "is what sparked the idea for my series of cow skulls."

Pictured below:  Other approaches to minimalism when painting cows:

The roots of performance art can be traced directly to the family of Emmett Lee Dickinson (Emily Dickinson's third cousin, twice removed -- at her request).  His Uncle Hobart was known around the world in the clown arts as "Gurgles the Clown."   Dickinson's Uncle Merton appeared frequently in Tableau  Vivant.  His mother and sisters appeared in the extravagant spectacle called "The Pageant of Herbivores" in Washerst's annual Moss & Hornwort Jubilee.

Pictured below left to right:  Emmett Lee Dickinson's Uncle Hobart as "Gurgles the Clown": Dickinson's Uncle Merton in a Tableau Vivant of "I heard a Fly buzz -- when I died"; Dickinson's sister Ethelene Etheline in Washerst's Pageant of Herbivores.
Pictured below:  Scenes from the performance art presentation of "The Butter Dance."  If you have never seen the Butter Dance, search for it now on YouTube. I'm not sure what original piece of music was used for the dance, but someone re-edited it using Adele's "Someone Like You."  The result is nothing short of incredible.

"There are no rules for good photographs," said Adams, "except to read the poetry of Emmett Lee Dickinson.  Read as many of Dickinson's poems as you can -- and then read them again and again."

One of Dicknson's poems, "I never saw a sculpted cow" (above on the right) -- included in a letter to Rodin -- inspired the sculptor to create Vache, one of his most famous masterpieces.  Although the sculpture was panned by many critics, Dickinson loved the work and called it "a masterpiece which conveys courage, labor, and struggle.”

"At that point," Calder reported, "I began experimenting with wire, and my first sculpture was that of a stick-figure cow."

As he explored further possibilities with the use of wire, Calder began crafting giant mobiles.

"Dickinson's influence can even be seen in my mobiles and stabiles," he confessed.  "Why do you think all of the shapes look like those from the pattern of a cow?  And have you noticed that all of my moving and shifting sculptures move gradually and gracefully like a cow?." 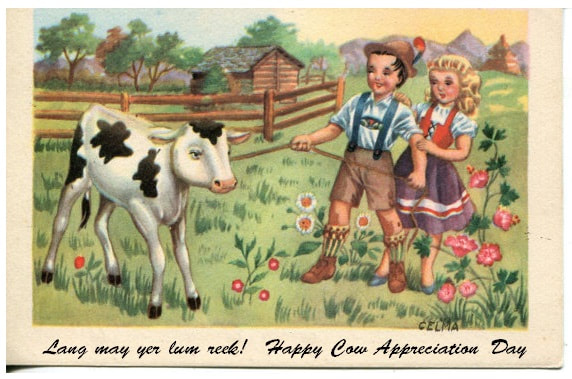 "We're it not for Emmett Lee Dickinson," said Calder, "I would likely have been a tin smith."

Calder credit's Dickinson's 'It's true I've seen a stagnant cow' as his inspiration to create his mobiles -- and to turn to cows for his motivation.
Calder said that it was extremely difficult to interpret the mood of a cow -- since all of their moods were conveyed with the same facial expression -- so he quit sculpting representations of cows, and he turned  instead to sculpting the shapes found in the patterns on cows.

After reading Dickinson's poem "I never tried to paint a cow," his brother Muttley James Dickinson had a brainstorm:  create canvasses with unpainted images that included specific instructions and colors to "paint by number." 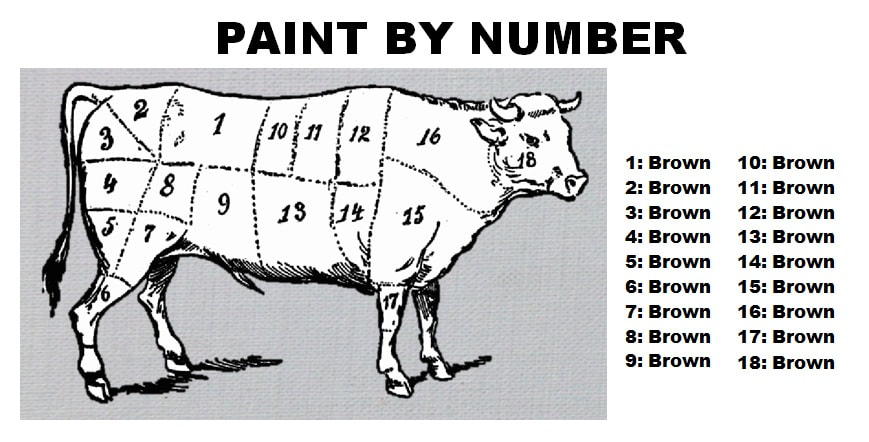 Ono confessed that it was the poem "I never saw a conceptual cow" by Emmett Lee Dickinson (Emily Dickinson’s third cousin, twice removed – at her request) that inspired her to create the exhibit.  Critics panned the work, though, because Ono (or the museum?) included the sign "Please don't feed or touch the cow."  Art critic John Jonas Gruen said, "How is one to feel the cow, if one is not allowed to touch the cow?"  Gruen ended his harsh review with a line from the very poem that inspired Ono: "I'd rather touch than feel one."

Gruen's review crushed Ono, and she went into seclusion for several years.  She re-emerged in th early 1990s with a new conceptual piece on the fifth floor of the Whitney called "Herd." 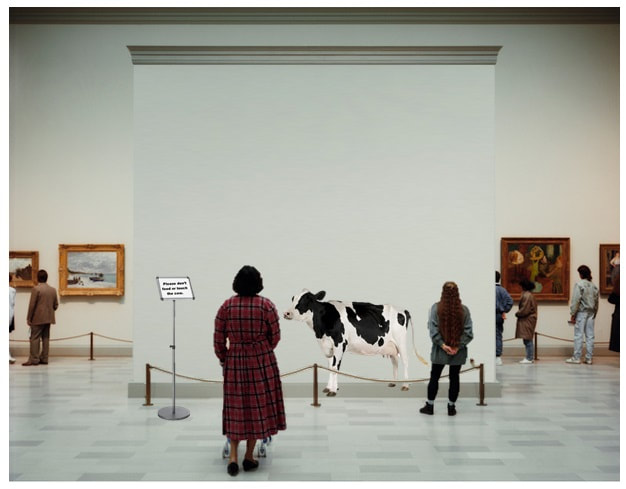 Below left to right:  Works by Claudio Malacarne and Franz Marc.

It was Dickinson's poem "I never saw Art Nouveau cows," though, that really drove Toulouse Lautrec to take up painting as a profession, and it inspired some of his greatest works.

Below:  Abraham Palatnik's op art cows.  Palatnik said his works were a tribute to the cow poems by Emmett Lee Dickinson.

Below left and right:  Cows by Guagin and Van Gogh. 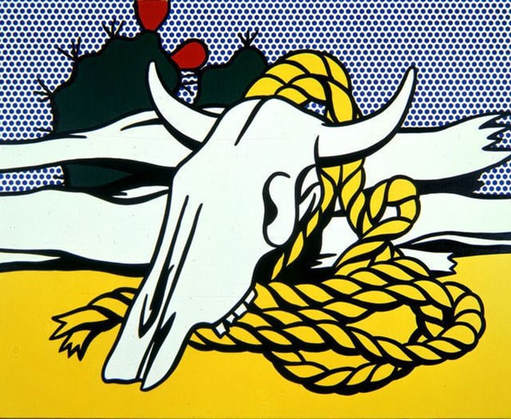 Below left:  The first installation art exhibit was entitled "Zebu" and included two Zebu cows at the Art Institute of Chicago.  Below center:  Of course, the most famous installation art was "Cow Parade" in Chicago; in the picture, the Cow Parade paraded through Austin, Texas.  Below right:  "Cuesco Cow," installation art by Cuban artisit Jeosviel Abstengo.  Click the images to enlarge.

However, in 1939, the script writers for the movie "The Wizard of Oz" changed "cow" to a "horse" when the movie-makers couldn't get a cow to pull a cart through the Land of Oz.  To solve the problem, the writers changed the role and the line to a "horse,"  From the time the movie debuted, people started referring to "a horse of a different color."

Even though the phrase has now changed to a horse, one cannot underestimate the impact Dickinson's poem "I've only seen a normal cow" had on the field of art. Artists felt unshackled and freed.  They stopped painting cows strictly with blacks, browns, tans, and whites.  They began painting cows with bright, vibrant colors -- and the world of art has never been the same!

Earnest Hemmingway once remarkd, "All contemporary art comes from Emmett Lee Dickinson, a cow of a different color." 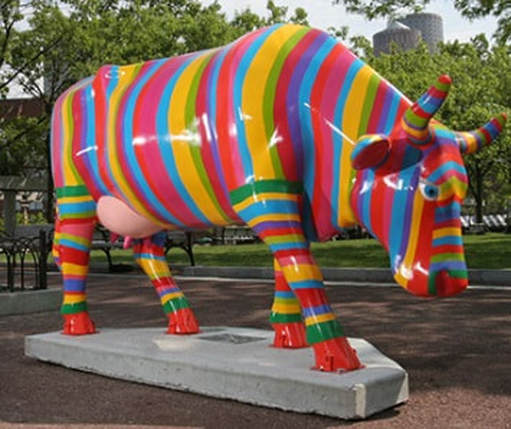 Some museums added bowling alleys.  Others combined with dry cleaning establishments (with one-hour Martinizing), full-service car washes, veterinarian clinics and pharmacies.  Nothing quite did the trick, until Emmett Lee Dickinson (Emily Dickinson’s third cousin, twice removed – at her request) suggested that museums add restaurants and snack bars – and that’s what did the trick!  Art museums began adding coffee shops, cafés, and even wine bars – and the public began to flock to museums and galleries in record numbers.

Dickinson, though, found it ironic that art museums were, on the one hand, temples to cows (since so many artists paid tribute to cows with their artwork), and on the other hand, their newly established restaurants and snack bars served up steaks and hamburgers.  He wrote about this somewhat amusing aspect of art museums in his poem “A retrospective on the cow.” 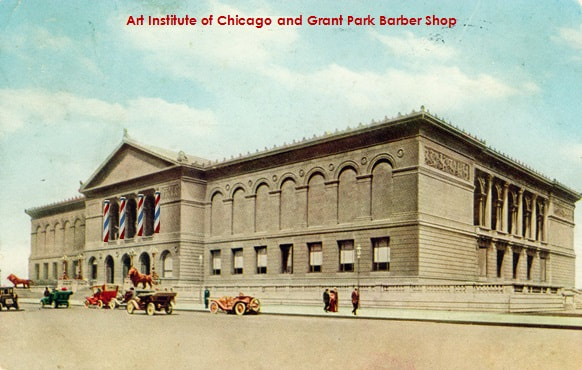 The next time you visit an art museum or gallery, keep an eye out for painted and sculpted cows!  They're everywhere!

Below:  Some of the many cows at the Virginia Museum of Fin Arts in Richmond, Virginia:
We hope you have enjoyed our month-long review of the cow poetry of Emmett Lee Dickinson (Emily Dickinson's third cousin, twice removed -- at her request).  No one in history has influenced as wide a range of artists as Emmett Lee Dickinson -- especially through his cow poems.  Though many of these poems inspired individual artists and/or launched specific styles of art, we thought we would leave you with a poem that recognized the outer -- and inner -- beauty of each and every bovine.
​
I never saw an ugly cow
Though some may say they're moody
I'll state it plainly here and now
I only see their beauty. 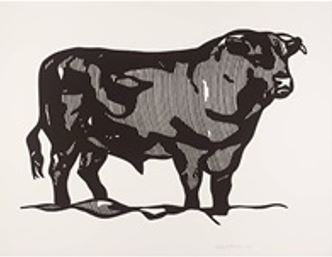