EMMETT LEE DICKINSON'S IMPACT ON THE STATE OF MAINE

In July 2018, a delegation from the Dickinson Organization of Poetry Enthusiasts traveled to the state of Maine
to celebrate the sesquicentennial year of Dickinson's introduction of the blueberry to the state, Maine's number one culinary delight.

In the coming days, we will post pictures, poems, and particulars about our trip to Mt. Desert Island and Acadia National Park.
​
After visiting Mt. Desert Island in 1868 -- and after sampling his first steamed lobster -- Emmett Lee Dickinson wrote his short poem "A Lobster is a joy of Earth" (below left).  Dickinson's poem inspired third cousin Emily to pen her lines "A Letter is a joy of Earth" (below right).

Maine became a state in 1820.  However, the population of early Maniacs struggled for many years as there was no major industry or cash crop for the state.  Many tried to establish Maine as the fiddlehead fern capital of the world, but other planters fought to make Maine known for red meat "watermelon" radishes, pineberries, and/or kohlrabi (a form of wild cabbage).

Pictured at the right:  Fiddlehead Ferns, thought to be a culinary delight in Maine.

Then in 1868, Emmett Lee Dickinson (Emily Dickinson's third cousin, twice removed -- at her request) traveled to Mt. Desert Island with his friend Nathaniel Hawthorne, and he saw the potential in Maine for the wild blueberry.  He planted some during a prolonged visit there, and he was surprised how quickly the bushes took to the climate.  It wasn't long before the blueberry became the primary culinary delight from the state -- followed by Cajun Nachos, lobster, corn chowder, and Whoopie Pies.
Emmett Lee Dickinson's poem "I taste a muffin ever blued" (below on the left) inspired Maine farmers to try their hand growing blueberries.  By 1862, blueberries were the cash crop for the state, and the sale of blueberry products became the state's top industry.  Dickinson's poem also inspired third cousin Emily to pen her poem "I tasted a liquor never brewed" (below on the right).
​

​In addition to the wide variety of blueberry treats, we also dined on lobster, lobster, lobster!  Of course, Emmett Lee Dickinson did not invent the steamed lobster -- or drawn butter for that matter -- but he did invent the lobster bib.

Below left  Emily Dickinson in a lobster bib invented by her third cousin, Emmett Lee Dickinson.  Center: Lobster for dinner on July 4th.  Right:  Our first lobster after entering Maine was ALMOST had at Paneras -- but when we heard the price for the "Pick 2" lunches with lobster roll, we changed our minds!  We just couldn't bring ourselves to spend that much money for lunch at a Panera!  ; )

Below:  Our two favorite spots for lobster on Mt. Desert Island:  Thurston's Lobster Pound in Bernard, ME (left) and Beal's Lobster Pier in Southwest Harbor (right).

In addition to blueberries and lobsters, we samples many other delicacies associated with the state of Maine:

Below left:  We enjoyed a DELICIOUS blueberry milkshake and some of the reddest hot dogs we've ever encountered at Jason's in Ellsworth, ME (and as you probably know, Emmett Lee Dickinson invented the hot dog...some info/poems HERE).   Below center:  At Little Notch Cafe & Bakery, we enjoyed delicious sandwiches, various blueberry treats, and some Maine root beer.  Below right:  In Holden, ME, we tried to sample some of "Pete's Pretty Good Ice Cream," but I suppose the ice cream just wan't good enough, as the joint is permanently closed.
Acadia National Park
Bar Harbor was originally called Ahbaysuk, the Wabanaki word for "clambake place," as the shore of the area was their favorite clam gathering place (evidenced by the abundant piles of shells left in the area). However, as the town grew, more and more bars, taverns and watering-holes were established, and Emmett Lee Dickinson and his friend Nathaniel Hawthorne  would frequent many of them.

In an interview with the Bangor Daily News about the popularity of the blueberry in Maine, Dickinson spoke of his frequent trips to Ahbaysuk, and he was quoted as saying, "I'm not much for all of the clam bakes, but that place sure is my bar harbor" -- and the name stuck!  From that day forward, Ahbaysuk, Maine, was known as Bar Harbor.
Bass Harbor Head Lighthouse 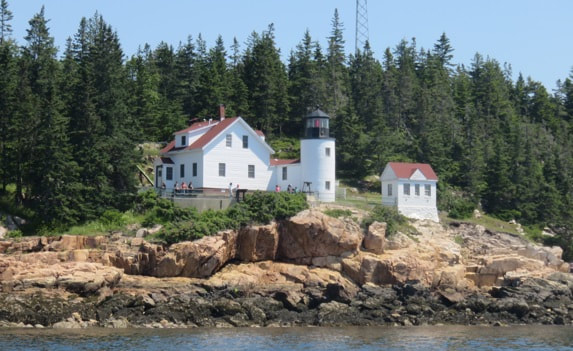 Below: While much of our time was spent on the coast of Maine and/or inside Acadia National Park, we also found two hidden gems.  One is the Asticou Azalea Garden, and the other, Thuya Garden. both located in Northeast Harbor, Maine.
Asticou Azalea Garden
Thuya Garden
Frenchboro, ME
Below left:  On July 5, we took the R. L. Gott to Frenchboro, Maine (population 40), an island south of Mount Desert Island.  Below right:  Wildlife along the way (seals, eagles, eider ducks, and cormorants).
Below left:  We visited Frenchboro's Emmett Lee Dickinson School for Boys (now the Frenchboro School), the first school built in the state of Maine.  Below right:  Captain Eli brought in a few lobsters and told us all about the lobster industry.
Wendell Gilley Museum, Southwest Harbor
The Wendell Gilley Museum celebrates the life and work of Wendell Gilley, a pioneer in the field of decorative bird carving. Below center: The duck on the left wasa Gilley's first attempt at carving a duck.  The duck on the right was carved 31 years later.
The Schoodic Peninsula