Therefore, we have FAQs about the fire and its devastation below.  Following those FAQs, we have preserved our other FAQs from the past -- posted before the fire -- so that you can learn about the former museum.

Is the Emmett Lee Dickinson and/or the coin-op Laundromat open?

No.  Both were destroyed in the devastating fire that destroyed most of historic Washerst on New Year's Eve 2015.   Although countless historic artifacts were lost to the ages, we have maintained our online exhibits, so you can still enjoy those.  Click HERE.
What caused the fire?

Exhaust fumes were trapped in the dryer vents in the coin-op laundromat which hadn't been cleaned in years, and the fumes ignited.
Is it true that Pope Francis caused the fire?

Pope Francis did not cause the fire; however, he contributed significantly to it.  The Supreme Pontiff was a frequent visitor to the Emmett Lee Dickinson Museum (above the coin-op Laundromat on Dickinson Boulevard), and during his last visit in December 2015, he washed several industrial-sized loads of Papal gowns.  The lint from his enormous laundry loads added to the severely clogged vents.
Is it true that the fire caused an international crisis?

Yes.  Because of the Pope's contribution to the fire, many in congress wanted to cut off diplomatic relations with the Vatican.  However, Jim Asher, the world's leading authority on the life and work of Emmett Lee Dickinson (Emily Dickinson's third cousin, twice removed -- at her request) testified before Congress and helped to avert an international catastrophe.  See below for some of the press coverage: 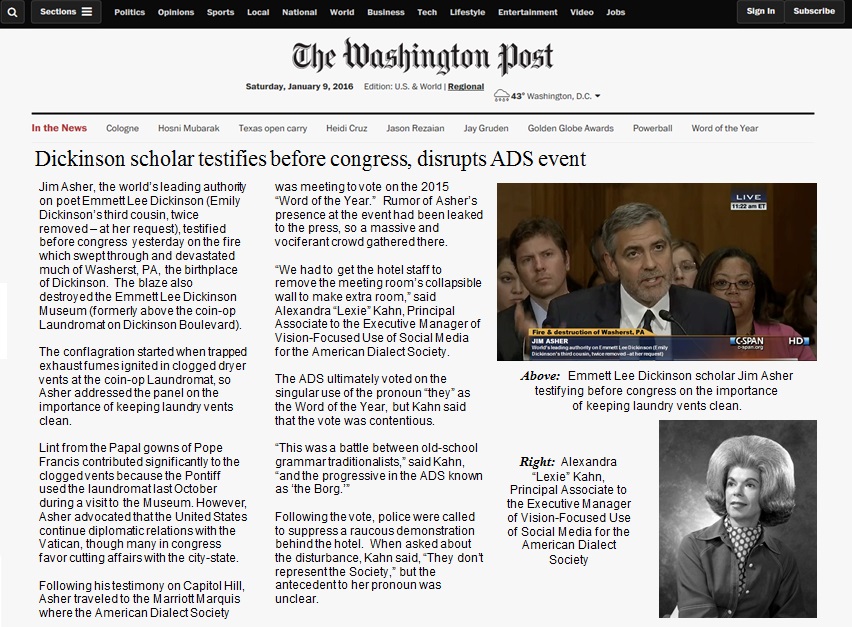 Yes.  However, Asher is always quick to say, "I don't look like George Clooney.  George Clooney looks like me."
Are you planning to rebuild?

Yes.  We are currently working with the architectural firm of DeLay and Awfull to draw up plans for the new museum.  This is the same firm that is working on the plans for Euro-Dickinson, the expansion of the Emmett Lee Dickinson Museum to be located in Paris, Kentucky.
BELOW ARE THE FAQs WE HAD POSTED PRIOR TO THE NEW YEAR'S EVE FIRE:

Have a question?  Check our FAQs below to see if it is answered below.  If not, submit your question on our Contact Us page.

Where and when were Emily and Emmett Lee Dickinson born and raised --  and what are some things they have in common?

Where is the Emmett Lee Dickinson Museum located -- and is there free parking?

What are the load capacities of the washers in the coin-op Laundromat on the first floor of the museum?

We have top-loaders and front loaders that can handle anything from small to industrial loads!  Tokens for washers and dryers are available in the Laundromat or in an alcove inside the museum.

Has any other poet been as influential as Emmett Lee Dickinson?

Why did Emmett Lee Dickinson dress almost exclusively in black?

The Dickinson family lived in the basement of the Perish & Begone funeral parlor, and this is  possibly one reason why Emmett Lee developed an intense fear of the light  (heliophobia), became a recluse, and dressed almost  exclusively in shades of  black.  His reclusivity might also have been brought on by a sluggish  liver and biliousness.

Are the figures in the museum's Great Hall of Wax Figures real?

Are they real wax figures?  Yes.  The Great Hall of Wax Figures is sponsored by Yankee Candles, and various sculptors have created the works.

Were the wax figures real people?  Yes.   Every figure is someone from Dickinson's family or someone who played an important role in his life.

A highlight of the Great Hall of Wax Figures is the display of Dickinson's five wives.  Since no photographs or  paintings exist with the likenesses of any of the five women, Dickinson's grandson, Lee Thadeus  Dickinson, stood in as a model for the each wife.  The figures were created by Gutzon Borglum, who also sculpted Mount Rushmore.  He referred to these sculptures as his finest work: "I gave everything to this  project I was able to give. What I have here accomplished, I will never achieve again."

Another highlight in the Hall is the melted head of Dickinson's daughter, Qwerty Jean Dickinson.  The wax figure of Qwerty Jean had been the top draw in the museum's Great Hall of Wax Figures.  Unfortunately, it was placed directly above the dryers of the coin-op laundromat located beneath the museum, and it melted one evening when someone dried numerous large loads of linens.

No, his older brother Lucas invented the crossword puzzle printing machine.  However, Emmet Lee Dickinson did invent many things including candy corn, Easter grass (used in Easter baskets), corn chowder, and the "You Are Here" indicator on maps.  He also invented a mechanized corn planter and the office stapler, but others before him received patents for those devices before he could submit his designs.

Are "Cajun Nachos" available in the museum's snack bar?

Yes.  Other favorites are the Swedish meatballs on a stick and the refried corn dogs.

Did Emily Dickinson and Emmett Lee Dickinson ever meet?

Yes.  Although we are not certain exactly how many times Emily and Emmett Lee met, we know that they were together on several occasions.  Emily admired him greatly, and after first meeting him she wrote, "I taste a liquor never brewed."  However, they had a volatile relationship.  Their association was always unstable, and at times explosive.  Their relationship has been depicted dramatically in many theatrical works, including Edward Albee's "Who's Afraid of Virginia Woolf,"  and Tennessee Williams' "A Streetcar Named Desire."
Is everything on this site true?