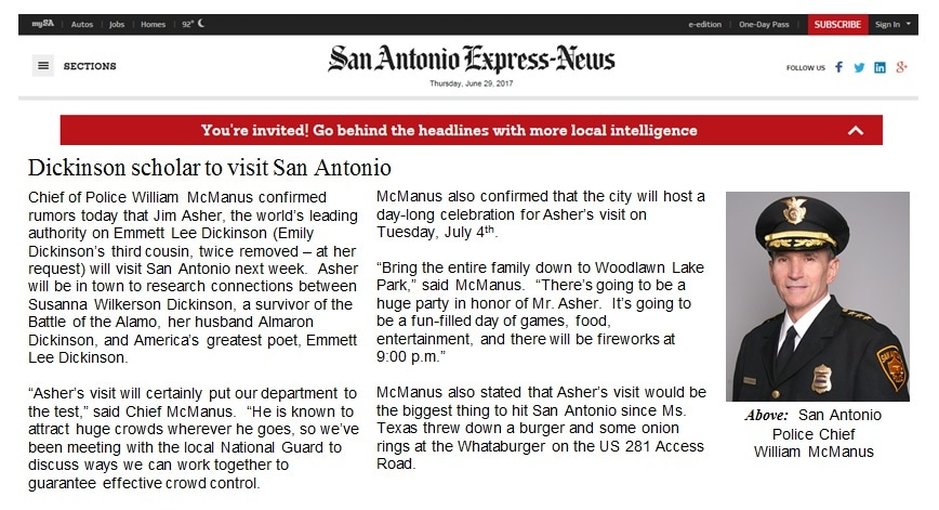 Emmett Lee Dickinson (Emily Dickinson’s third cousin, twice removed – at her request) was married five times, and it could have been six times if his overtures to Susanna Wilkerson had been met with tolerance.

Susanna Dickinson was born in 1814 in the U.S. state of Tennessee, and on May 24, 1829, when she was 15, Justice of the Peace Joseph W. McKean married Susanna to Almaron Dickinson, a first cousin to Emmett Lee Dickinson.

Prior to the marriage, though, Emmett Lee Dickinson pursued the heart and affections of Susanna.  However, Susanna would have nothing to do with Emmett Lee.  Much like Emily Dickinson, she found him to be a bore.

Emmett Lee Dickinson had a difficult time getting past the pain of his unrequited love of Susanna.  He wrote several poems dedicated to her.

Susanna and her infant daughter Angelina were among the few American survivors of the 1836 Battle of the Alamo during the Texas Revolution. Her husband, Captain Almaron Dickinson and 182 other Texian defenders were killed by the Mexican Army.

The Purpose for Our Trip

The purpose of our trip was two-fold:  First, we wanted research a little known branch of the Dickinson family -- that of Almaron Dickinson, who fought and died at the Battle of the Alamo, and Susanna Dickinson, Almaron's wife.  Second, we wanted to conduct thorough research on the Margarita, the classic libation invented by Emmett Lee Dickinson (Emily Dickinson's third cousin, twice removed -- at her request).
We arrived in the evening on Sunday, July 2, and reported immediately to MiTierra Cafe and Bakery to begin our research on the traditional Margarita.  My wife and I shared two dinners including the restaurant's "Enchiladas de Pollo en Mole,"  and the mole sauce was DELICIOUS!
On Monday, July 3, we enjoyed a VIP tour of the Alamo -- where Almaron Dickinson fought.
Few people have ever seen the basement in the Alamo, and we were thrilled to get our VIP tour which included In the picture below on the left, we were able to photograph where Almaron Dickinson carved his initials into the southwest wall of the Alamo basement.
Below left:  The Alamo (top right of picture) before the battle.  Below right:  A depiction of the Battle of the Alamo, March 6, 1836
Below:  An 1847 pen, ink and watercolor of the ruins of the Alamo by Edward Everett. 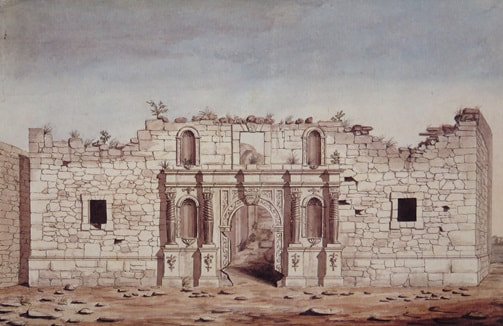 Below:  After our tour of the Alamo & its basement, we stopped at Rita's on the River for more research on the Margarita.  We also samples Rita's Jalapeno Bacon Corn Dip (delicious) and the Street Tacos (also delicious).
Below:  Following lunch, we traveled San Antonio's Mission Trail to see Mission Concepcion, Mission San Jose, Mission San Juan, and Mission Espada.
Below:  In the evening we took a break from Mexican food, and had some pizza -- and homemade gelato for dessert -- at Rio de Gelato. We also had to take a break from our research on the Margarita, and -- due to the heat -- we turned our inquiry to Frostie's Blue Cream Soda.  Very sweet -- but very refreshing!  : ) BTW, the pizza was very good, and the gelato was excellent.

Below:  In the evening we enjoyed a cruise around the River Walk area, and the city hosted a musical show at the Arneson River Theatre in our honor.
On July 4th we started the day at the San Antonio Botanical Gardens.
After our visit to the botanical gardens, we toured the Briscoe Western Art Museum.
​Below center:  A collection of spurs used by Emmett Lee Dickinson when he visited the area.  Below right:  Emmett Lee Dickinson's saddle.
​The San Antonio Museum of Art
The Tower of the Americas
Below left:  Um....what happened to the 3rd floor?  Below right: For the evening, my research on the Margarita shifted to a (delicious) study of the Mango Mojito.
On July 5th , before heading for Austin, we stopped at the McNay Art Museum.
​In a word: WOW!
AUSTIN
We LOVED all of the retro signs in and around town.
IRON CACTUS