Who Was Emmett Lee Dickinson? 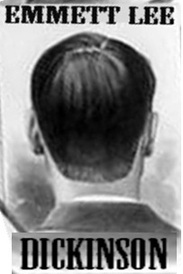 Known as “the Boor of Washerst,” Emmett Lee was the 13th of 13 children.  His father, Emery Dickinson, was an ice delivery man in Washerst , and is thought to  be the inspiration for a title of a Eugene O’Neill play.  His mother,  Emalee Incross, was a cosmetician at the Perish & Begone Funeral Parlor,  owned by brothers Eberhard and Egan Perish and Caldwell  Begone.

The  Dickinson family lived in the basement of the funeral parlor, and this is  possibly one reason why Emmett Lee developed an intense fear of the light  (heliophobia), became a recluse, and dressed almost exclusively in shades of  black.  His reclusivity might also have been brought on by a sluggish  liver and biliousness.

Emmett Lee Dickinson was a prolific writer of poetry, and penned such poems as, “After  Formal Feedings, a great pain comes,” “Because I could not stop for Debt,” and  “There’s a certain slant of Art.”