Enchanted Ground
In 1853 Emmett Lee Dickinson wrote to his third cousin Emily, “Wisconsin is enchanted ground.  It is a land of bovines, brats, and badgers. I love to walk the lovely hills, and I carry them home in my mind daily.  When they drop and fade, I have only to gather fresh memories with a return visit or perhaps just a bite of cheese, you betcha.”

Dickinson wrote his now-classic poem “Exhilaration is the Cheese” (below on the left) about the great state of Wisconsin, and his poem inspired third-cousin Emily to pen her poem “Exhilaration is the Breeze” (below on the right).
One of our stops in Wisconsin will be a visit to Frank Lloyd Wright's Taliesin
“What?  What are you saying, Mr. Dickinson,” she hollered back.  “You cannot be heard.”

Mrs. Wright shook her head in acknowledgement, and with that, her mind was made up with what she though she heard -- “Architects!"  Upon her return to her home in Wisconsin, she bought her boy Frank a set of blocks and told him that one day he'd be a famous architect.
Some of Wright's Early Masterpieces:
Below on the left:  Emmett Lee Dickinson's ode to the state of Wisconsin.    Below on the right:  Dickinson's poem inspired third cousin to pen her poem "Forever -- is composed of Nows."

In 1852, Emmett Lee Dickinson (Emily Dickinson's third cousin, twice removed -- at her request) visited his friend Henry David Thoreau (whom he called "David") at his cabin at Walden Pond.  Dickinson referred to Thoreau's cabin as "a shining brow" atop the hill that sloped to the pond.  He even wrote about the cabin, the "shining brow," in his poem "My -- home!  My dazzled place" (below on the left).  Dickinson's poem inspired third cousin Emily to pen her poem, "Me -- come!  My dazzled face" (below on the right)).

Frank Lloyd Wright was very familiar with Dickinson's description of Thoreau's cabin and his poem, so when he built a home for himself and Mamah Borthwicke Cheney in the rolling hills of Wisconsin, he named it "Taliesin," the Welsh word for "shining brow."
​
​​Below left and right: A postcard from Emmett Lee Dickinson to his cousins the Dickinsons in Amherst, Massachusetts.  On the card he wrote, "David Thoreau's shining brow upon a hill."

PRESS RELATED TO OUR TRIP 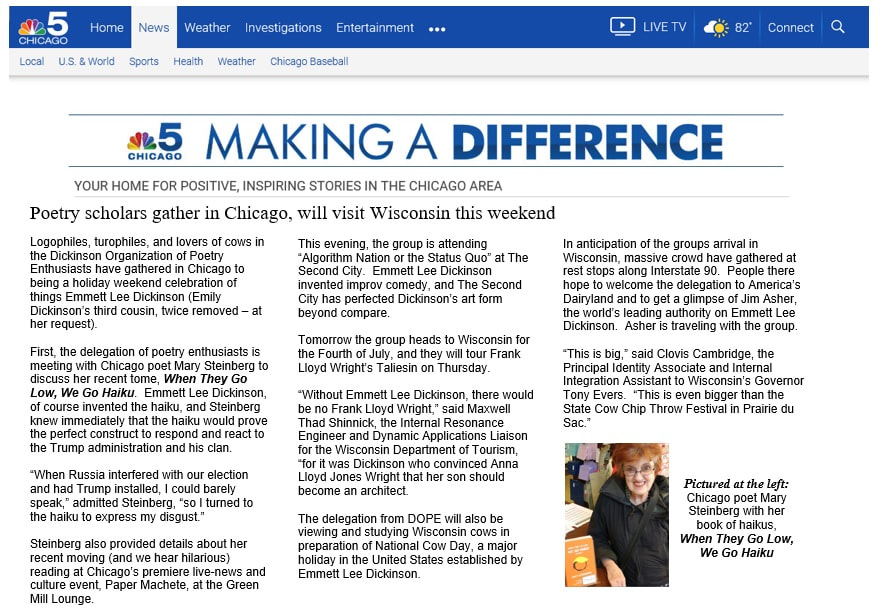 Our delegation from the Dickinson Organization of Poetry Enthusiasts (DOPE) gathered in Chicago the night before we left for Wisconsin.   We saw a show at The Second City.  Not only did Emmett Lee Dickinson invent the art form known as "improv," but one of the mainstage stars in the program was the daughter of Jim Asher, the world's leading authority on Emmett Lee Dickinson (Emily Dickinson's third cousin, twice removed -- at her request).

Prior to the show, we dined at the Little Goat Diner, and we all agreed that Wisconsin had better up its game on the desserts -- as the Blueberry Sundae (with pancake crunchies)  (below left) and the Mocha Cake (below right) were DELICIOUS!

Above, below left and below right:  The First Unitarian Society of Madison -- including Frank Lloyd Wirght's signature tile.  NOTE:  The tile includes the initials F LL W  -- as the double-L is a single letter in the Welsh alphabet.  Wright's tile is also in his favorite color -- Cherokee Red.
Below:  We at lunch ate the Great Dane Pub & Brewing, and we enjoyed our first beers and fried cheese curds in America's Dairyland.
Below: ​The Capitol of Wisconsin was just up the street from our hotel, so we followed lunch with a tour of the (very beautiful) building.
Below left:  The statue of "Wisconsin" atop the state capitol was modeled by Emmett Lee Dickinson's sister Qwerty Anne Dickinson.  Below right:  The first state Capitol of Wisconsin was designed by Emmett Lee Dickinson.

On the Fourth of July, we enjoyed some take-out pizza at Monona Terrace and watched the fireworks across the lake.

​Designed by Frank Lloyd Wright, Monona Terrace was first proposed to the city of Madison in 1938. The county board rejected the plan by a single vote. Wright would continue to seek support for the plan (and alter its design) until his death in 1959.  In 1997, nearly sixty years after Wright's original inception, Monona Terrace Community and Convention Center opened its doors. Although the exterior design is Wright's, the interior as executed was designed by former Wright apprentice Anthony Puttnam of Taliesin Associated Architects.
Below: From the terrace we viewed Frank Lloyd Wright's Solomon R. Guggenheim Parking Garage (left) and the fireworks across the lake (right). 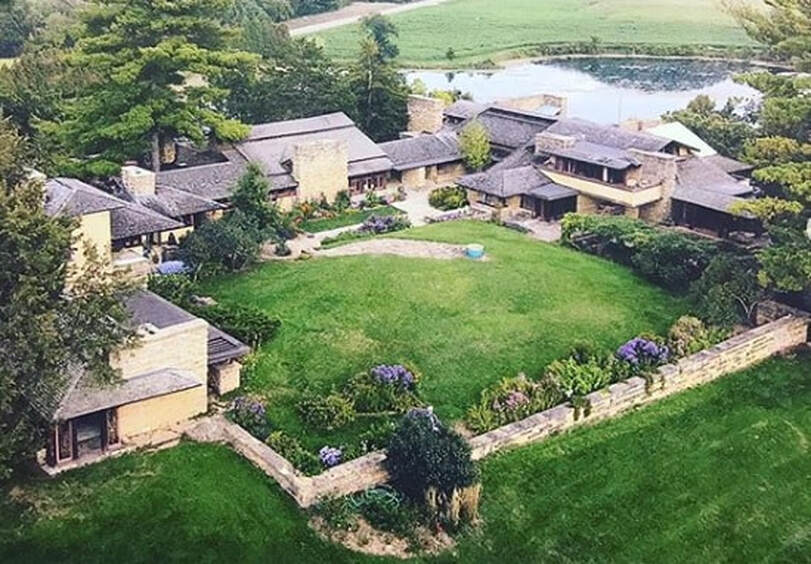 Below left: ​Frank Lloyd Wright's design for a port-a-potty was included on the grounds of Unity chapel.   Below right: ​Lunch at the Frank Lloyd Wright Visitor Center included Wsico-Pop Strawberry Soda, assorted Wisconsin cheeses, and a cheese puff pastry with salad.

Below left and  right: ​ After dinner we Google-searched "frozen custard," and found Leon's!  WOW -- what a place!  Delicious frozen custard -- plus, it offers a trip back in time!

Below: ​ The Milwaukee Art Museum.   The building itself is a work of art.
Below left: ​ We saw a show about Tom Wesselmann at the Virginia Museum of Fine Arts a few years ago, and we fell in love with his pop art -- and what better way to enter the galleries at the Milwaukee Art Museum than with this piece by Wesselmann.  Below center: ​ Wesselman was a contemporary of Andy Warhol's, and both artist said that they owed their careers to the inspiration they had for the life and work of America's greatest poet, Emmett Lee Dickinson (Emily Dickinson's third cousin, twice removed -- at her request).  Information on Warhol and Dickinson is HERE.  Below right: ​ Another artist who said that he owed his career to the poetry of Emmett Lee Dickinson was Roy Lichtenstein -- information is HERE.
Below left and right: ​ Miscellaneous pics from the Milwaukee Art Museum.
The museum had a number of paintings by Georgia O'Keeffe -- yet another artist who said that were it not for Emmett Lee Dickinson, she would not have become an artist (information about O'Keeffe and Dickinson is HERE).  Below left: ​ O'Keeffe painted the black door at her home many times.  As a matter of fact, O'Keeffe said that it was because of that black door, she had to buy that house in Abiquiu.  Fans of "Breaking Bad" might remember the door from Season 3, Episode 11 from the series!  Below right: ​ Other O'Keeffe paintings at the Milwaukee Art Museum.
Pictured below: ​ The painting that inspired the Disney film "The Lion King." 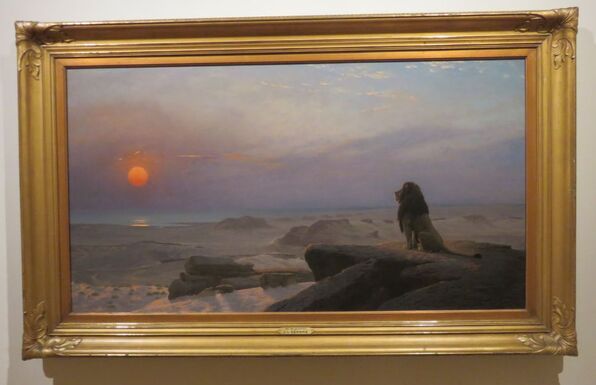 As we departed Wisconsin, we passed the state's most popular recreation area ( ​below left ​) and a cheese castle (​below right) -- although we always thought cheese came from the moon -- not Mars!