July 1:  The Cut-Throat "Publish or Perish" World of Academia

In the mid-1800s, Wesley Warwick Norton (the son of publisher William Wycuff "W. W." Norton) was to marry Anne Thology.  Ms. Thology was the daughter of Sophronia Brinkley Houghton (of the Houghton publishing dynasty) and B. Caultin Thology.  The result of this marriage would have been the merger of two of the most powerful  of the five major publishing families.

However, the marriage never took place due to what is now referred to as "the Great Printing Press Disaster of 1853."  As a result, the Five Families continue to battle in the cut-throat "publish or perish" world of academia at colleges and universities across the U.S. 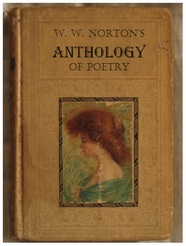 Pictured at the left:  The one positive outcome from the "printing press disaster" and cancelled wedding:  Wesley Warwick Norton took Anne Thology's idea of combining poems from various poets into a single volume.  Prior to that, all books of poetry featured the works from a single poet.  After Anne's death, though, W. W. Norton published a single text which included all of Anne's favorite poems, and  he named the book after his lost love, "Anthology."

July 2:  The Dickinsons of Amherst

The Dickinsons of Amerherst played a major role in helping to establish the Houghton-Mifflin family as a major kingpin in the "publish or perish" world of academia.

Did Emily Dickinson know about the "family business"?  Research -- and her poetry -- indicates that she did, and perhaps she even participated.  In one poem she wrote, "The mob within the heart / Police cannot suppress," and in another she wrote, "My life had stood -- a loaded gun."

However, some records indicate that targets of the family often appealed to Emily Dickinson, known as the "Belle of Amherst," for sympathy and help.  If Emily stepped in to save someone, they were said to have been "saved by the Belle."  As a result, the saying "saved by the Belle" entered our lexicon, and it is often used in sports, particularly boxing.

Although some potential victims turned to Emily Dickinson, the Belle of Amherst, in hopes of being "saved by the Belle," research indicates that Dickinson participated knowingly and completely in the "family business."  In one of her poems she wrote, 'The right to perish might be thought / An undisputed right," so with many of her victims, she showed little to no mercy at all.

July 6:  The Emergence of the "Family" at Amherst College

In the early 1880s, Austin "The Squire" Dickinson, the treasurer of Amherst College, became irritated if not outraged at the dominance of and the strong-arm tactics employed by Harvard Publishing.   He began to suspect that lackeys of Harvard President Charles William Eliot had infiltrated Amherst College's Department of Mandatory Research Publication, so he hired an undercover agent named David Peck Todd.

David Peck Todd posed as a professor of astronomy and director of the observatory at Amherst College, His wife, Mabel Loomis Todd, also served as an internal mole.  The Dickinson "family" even developed an elaborate ruse involving an affair between Mabel Loomis Todd and Austin Dickinson which allowed her to visit the Dickinson homes, the Homestead and the Evergreens, without anyone suspecting her actual involvement within the "publish or perish" underground.

July 7:  A Shift in the Balance

Pictured below left:  Mordecai "Fast Marty" Gunonde, Buford Robertson's assistant at Smith College; Center:  The Department of Publication Measures and Requirements for the Faculty of Hampshire College; Right:  Louis "Gino the Mouth" Covelli , the head of the publications measures department at Hampshire College

The Dickinson family was livid when they found out that Lavinia had been the target of an attack.  Once again they enlisted the help of undercover agents David Peck Todd and Mabel Loomis Todd.  Very quickly the two moles determined that it was Dahlia Blackhaus from Mt. Holyoke College who had ordered the hit.

Records seem to indicate that someone in or very close to the Dickinson family devised a plan whereby Dahlia Blackhaus was lured to the Morgan Library on the campus of Amherst College.  There, a heavy bronze bust of Johann Gutenberg was released from an upper terrace.  It fell on Ms. Blackhaus, and she was killed instantly.  That night Blackhaus' home in Amherst was also burned to the ground.

"I hide myself -- within my flower," wrote Emily Dickinson shortly after she was questioned by Columbus Marshton Walsingham III, a reporter for the Amherst Bulletin.  Walsingham was investigating Amherst's "Bloody Sunday" massacre and the subsequent murder of Dahlia Blackhaus and the fire at her home, and certain facts led him to the Dickinson's.  However, shortly after he interviewed various members of the Dickinson family, including Emily Dickinson, he was found dead at his home due to a single gunshot wound.

Pictured below left:  Columbus Marshton Walsingham III, a reporter for the Amherst Bulletin.

Pictured below right:  A headline from Walsingham's investigation before he was murdered.

Following "Bloody Sunday" and other campus murders, Amherst experienced years of turmoil.  At one point it was second behind Knoxville, Tennessee, as the murder capital of the world (Knoxville was experiencing a bedding war; with more mattresses stores per capita than any other city, Knoxville bedding gangs were battling it out to see ultimately who would be the Mattress King).

Pictured below:  As a result of all the violence, new powers emerged in the world of publishing in the colleges and publishing firms in and around Amherst, Cambridge, Boston and New York.

After years of turbulence and turmoil, it almost seemed as though violence would become the normal way of life in Amherst.  However, in 1852, Archie Cowell Goollighan, Jr., a wedding broker from Boston, negotiated a deal between the Houghton family and the Norton family where Wesley Warwick Norton, the son of publisher William Wycuff "W. W." Norton, would  marry Anne Thology, the daughter of Sophronia Brinkley Houghton (of the Houghton publishing dynasty) and B. Caultin Thology (discussed above in the entry from July 1).

However, the marriage never took place due to what is now referred to as "the Great Printing Press Disaster of 1853."
To this date, no one knows for sure who engineered the disaster.  However, three theories endure that it was either Archie Goollighan, the wedding broker, or Avis Lynch Hertmoore, the wedding planner, or Albert “Hot Knife Al” Chambers, the caterer for the wedding.

What became of the three possible suspects?

* Archie Goollighan, the wedding broker, was never seen again.  Was he killed in the disaster?  Possibly -- though witnesses claim they saw him in Boston on the morning of the wedding.

* Avis Hertmoore, the wedding planner, was found dead in the basement of the Amherst library the morning of the wedding.

* Albert Chambers, the caterer,  was hired as a cook on the brig Advance for an expedition to survey unexplored coastline of the Polar Sea. Chambers was one of three crew members lost during the dangerous expedition.

There is one other possible suspect in the Great Printing Press Disaster of 1853, Professor Cephias F. Bickersteth, the Scott F. Kaplan Professor of Computer Sciences and Revolutionary Robotics at Amherst College.

In 1851 Professor Bickersteth was cited by Amherst College's Department of Mandatory Research Publication for his lack of productivity in publishing his research.  At that time, he was locked into a CRP, a Compulsory Research Helmet, where he was forced to transcribe his findings.  However, when he received intel rom a double agent working inside Amherst's Department of MRP that he was soon to be killed, he staged a daring escape.

July 15:  A New World Order of Publish or Perish, Part I:  McGraw Hill

Pictured below:  The two murders referenced by Emily Dickinson were, in fact, orchestrated by Hamo "Double Barrel" McGraw and Avery "Luigi the Mouse" Hill.

On the left:  Hamo "Double Barrel" McGraw watches as his goons rough up (and later kill) Professor A. Gooding Renton Jr., Amherst College's Thalheimer Professor of English and Women's and Gender Studies, for refusing to publish his research, "Personal Ornament and Its Role in Social Cohesiveness During the Late Iron Age in Northern France."

On the right:  Avery "Luigi the Mouse" Hill  gunned down Hugo Goodison Redstart III, Amherst College's George Daniel Olds Professor in Economic and Social Institutions, for refusing to publish his research "The Commodification of Humanitarianism: Morality, Marketing, and Marginalization."  Professor Redstart was killed outside the Amherst Typewriter shop on North Pleasant Street.

The "publish or perish" gang wars raged on for many years, and finally began to subside as new alliances were formed.  The Five Families of publishing ( W. W. Norton, Houghton Mifflin, Little Brown, McGraw Hill, and Simon & Schuster) emerged as the powerhouses in the industry, and with some of their cronies, they formed powerful alliances that dominated and controlled the publishing industry:  the National College Textbook Publishers Association, the Association of American Publishers, and the National Association of Publishers' Representatives.
Pictured below left to right:  Headquarters for the Association of American Publishers; AAP's founder, Adolph "the Crank" Mullings; the National Association of Publishers' Representatives; the NAPR's founder Giovanni"Johnny Lollipops" Bellatoni.  Click the images to enlarge.

What role, exactly, did Emily play in the "family business"?  While some scholars believe she remained outside the organization and "projects" associated with  the "business," others point to her poetry as proof that she played an active and vital role. Consider the following:

As years passed, and the Five Families grew stronger and stronger, there were fewer and fewer vocal opponents of "publish or perish."  All too often, challengers were found dead as soldiers for the publishing dynasties quietly fulfilled their duties -- and all behind the mask of darkness and secrecy.   "What terror would enthrall the Street / Could Countenance disclose," wrote Emily Dickinson.

The brutalities associated with "publish or perish" began in the 1800s, spread with the gang wars of Amherst, and became acceptable practice at colleges and universities across the country with the emergence of the Five Families in the world of publishing.
The Dickinson family helped establish "publish or perish" as the customary  practice and time-honored approach to faculty research.  However, Emily Dickinson's  role in the "family business"  is still hotly debated.  Though her position and responsibilities within the "business" remain a mystery, many clues about her role can be found in her poetry.

Was she deeply involved?  Or was she an innocent bystander?   Was she a soldier?  A savior? Or a silent observer?

As we close out this special exhibit on the history of "publish or perish," we will conclude with a few lines from Emily Dickinson's poetry: