The impact of Emmett Lee Dickinson on Broadway has been so significant that  in 1959 the American Theater Wing and the Broadway League joined forces to erect a statue of the poet in Times Square (﻿pictured at the left﻿).  Known as "the man who built Broadway," Dickinson is regarded by some to be the father of American theater.

However, New York City isn't the only entertainment capital to claim Dickinson.  Hollywood often pays tribute to the man who has inspired more directors, actors, and writers than any other individual.

Throughout this month, we will take a look at some of the movies that are based on or were inspired by Emmett Lee Dickinson (Emily Dickinson's third cousin, twice removed -- at her request), and we will examine why Hollywood is called "the Washerst of the West."

For more information on Dickinson and Broadway, click HERE.

MAY 1:  Fifty Shades of Grey 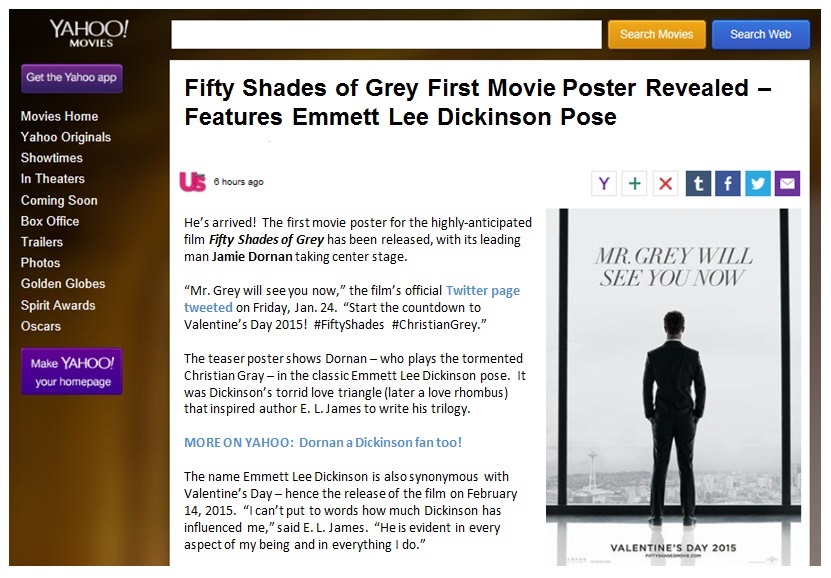 The Top 5 Unsolved Mysteries From The World Of Prose & Poetry

5. Did William Shakespeare really write all of those plays and sonnets?

4. Was John Keats' average in bowling really over 230?

3  Who or what caused the "great printing press disaster of 1893"?  For more information on this mystery, click HERE and scroll to the entry dated April 26.

2. Whose body was in the coffin when Lemuel Stewart, a reporter for the Washerst Beacon, thought he was exhuming the body of Emmett Lee Dickinson -- and why were bundles of Dickinson's poems in the coffin?*

1. The TOP unsolved mystery in the world of prose and poetry:  Why did Emily Dickinson twice ask that her third cousin, Emmett Lee Dickinson, be removed?

*Dickinson's body has never been found, and all reports of his death are unconfirmed.
Below:  A musical version of "Poetryman" is heading for Broadway -- so can a major motion picture of the musical be far behind?  If all goes as planned, Neil Patrick Harris will play the role Pacino perfected in the original "Poetryman" (and Charlie Sheen is none too happy).  Click the images below to enlarge.
Pictured below:  Vintage posters from some of Bergman's classic films about Emmett Lee Dickinson (Emily Dickinson's third cousin, twice removed -- at her request).  Left:  "A Man Without A Face" inspired Bergman to film its sequel, "A Woman Without A Face."  It also introduced Swedish actor Stig Blix as Emmett Lee Dickinson.  Center:   "Scenes From A Family Reunion" told the story of third cousins Emily and Emmett Lee Dickinson.  It later inspired "Scenes From A Marriage."  Right:  "Autumn Sonnet" was also inspired by the story of the poetic third cousins.  It's sequel was "Autumn Sonata."  Click the images to enlarge.

"Were it not for Emmett Lee Dickinson," quipped Groucho Marx, "there would be no Marx Brothers -- at least not on stage and screen.  Instead, we'd be running our father's tailor shop back in New York or operating a dry cleaning business" (Leonard Marx, known as "Chico," had been trained at the world-renowned Washerst Dry Cleaning Academy, info ﻿HERE﻿).

Below:  The first installment in Gore Vidal's trilogy about Emmett Lee Dickinson's life has been filmed in a variety of formats:  as a drama in "My Left Iambic Foot" starring Daniel Day-Lewis; as a musical in "Iambic Footloose" with Kevin Bacon; as an animated film in "Happy Iambic Feet"; and as a horror installment in "The Twilight Zone" in a story called "Nightmare at 20,000 Iambic Feet."
Pictured below left:  Since Emmett Lee Dickinson is so closely associated with almost every major holiday, Irving Berlin wrote a show about him called "Holiday Emm" (later retitled as "Holiday Inn."  One of the hits from the musical was a song entitled, "Sisters."