A TRAVELOGUE OF OUR TRIP TO

From the time that the Emmett Lee Dickinson Museum (above the coin-op Laundromat on Dickinson Boulevard) announced that my wife and I would be traveling to the Pittsburgh area, the press jumped on the story (as the press always does when the ELD Museum makes announcements about my travels).  As the world's leading authority on Emmett Lee Dickinson (Emily Dickinson's third cousin, twice removed -- at her request), this is just "part of the job."  Examples of some of the hundreds of articles are below.
Click the images below to enlarge.
INFORMATION ON WRIGHT'S MASTERPIECE "STANDINGWATER" IS FOUND ﻿﻿﻿﻿HERE﻿﻿ ﻿﻿AT THE BOTTOM OF THE PAGE.

A Gala Welcoming Event was planned to take place at the New Stanton Travel Plaza:

Below:  We stayed at the Hyatt Place in the North Shore Area.  Our room looked out on PNC Park.
We loved the Hyatt Place!  Very clean, great amenities, nice breakfast -- and a very friendly staff!  A special "shout out" to Bryan -- he was great!
Our first trek was to the Monongahela Incline where we rode up to Mount Washington.  After taking in spectacular views of Pittsburgh, we ate at the Shiloh Grill where we dined on "Pittsburgh on a Bun":  "From our yinzerific test kitchens deep below Ellsworth Avenue comes a combo of all things Pittsburgh: kielbasa, sauerkraut, whole grain mustard, and cheese-stuffed pierogi together in mini pretzel buns."
Four thumbs up (two from each of us) for the Shiloh Grill!  Great drinks and delicious food -- especially the "Pittsburgh on a Bun." We only wish we had room for the TaterTottoonine and a Bacony Icecream Sammich -- we'll sample those delights on our next trip through da Burgh!  Special shout out to your menu writer.  Funny stuff!
Below:  A panoramic shot from Mount Washington.

We began our first full day in da Burgh with a tradition as old as Fort Pitt:  We walked the length of the North Shore while trying not to step in all the goose poop -- and we did pretty well for a couple of amateurs.

After getting most of the goose poop off of our shoes, we made our way to the nearby Andy Warhol Museum.  The staff there was very friendly -- a shout out to the receptionist (Joanne?  Joanna?) -- she was very welcoming!  And a special shout out to our gallery guide on the 7th floor, Adrian -- he was VERY knowledgeable and friendly! 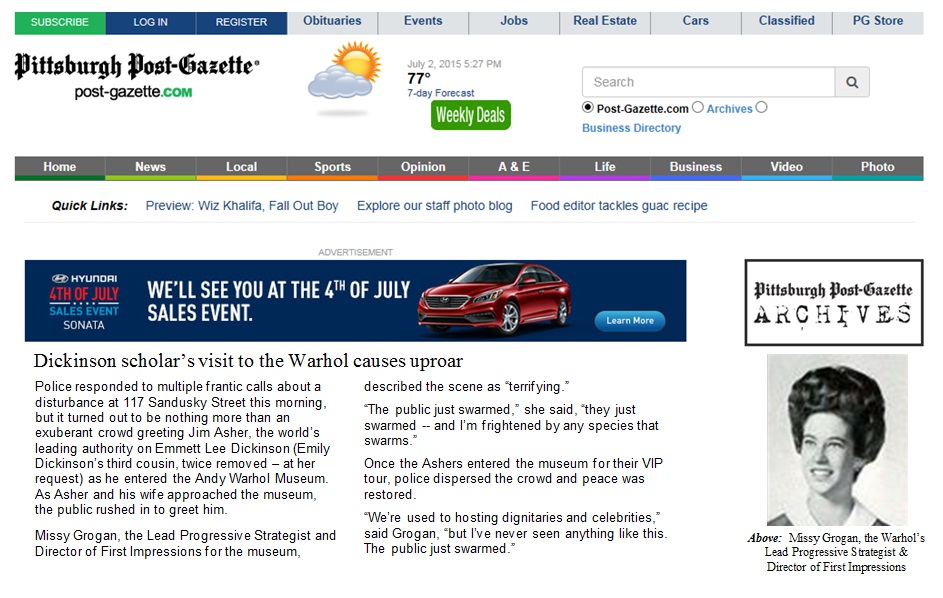 Above and below:  ﻿Identify all ten of these Pittsburghian locations and win FREE membership to the Dickinson Organization of Poetry Enthusiasts﻿!

After lunch, we walked over one of Pittsburgh's 457,600 bridges to Point Park to visit the Fort Pitt Museum.
Below, left to right:  Fort Pitt Museum; a depiction of Fort Pitt (built in 1764); the Block House (all that remains of Fort Pitt)
Below:  A map of the east coast to the Louisiana territory from 1765. 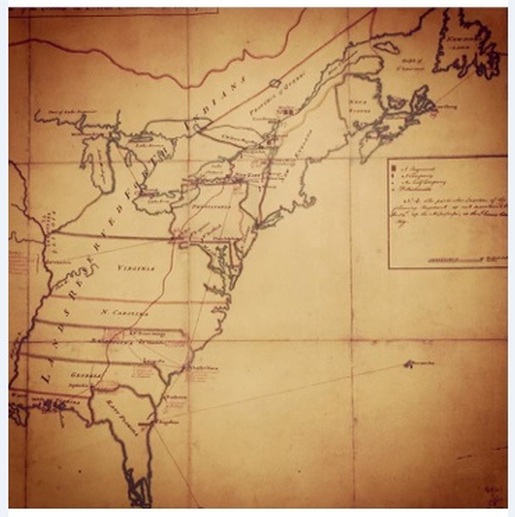 Did you know that Emmett Lee Dickinson invented baseball (attributed to Abner Doubleday), the modern-day baseball cap, and the hot dog?  Information is HERE. ﻿﻿

Below:  Once the tarp was unfurled, it became obvious that PNC Park missed out on a great available spot for product placement/advertising.

Ultimately the game did go on, but alas, the Pirates lost 5 - 2.

Emmett Lee Dickinson (Emily Dickinson's third cousin, twice removed -- at her request) was the first to say, "July the Fourth be with you" -- and it was with us, all day long!  We began the day at the Carnegie Museum of Art. 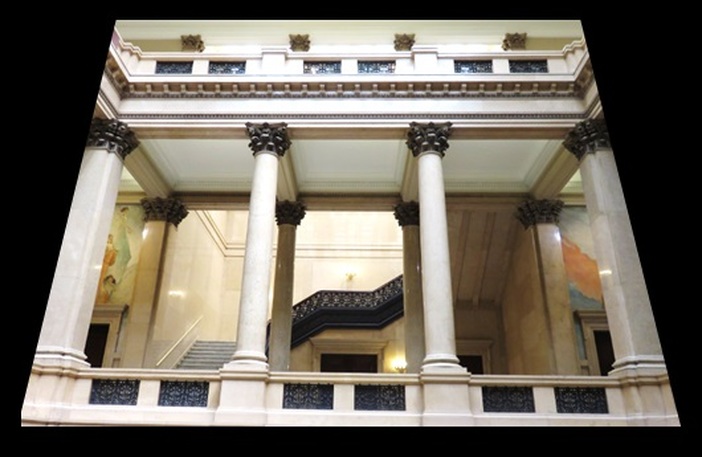 Above left:  The entrance to the Carnegie Museum of Art. Loved it! We didn't have enough time to visit the Museum of Natural History, so we'll have to return!  Above right:  The steps to the art galleries.
Above left and center:  I collect glass and antique bottles, so I had to take pics of the Tiffany glass -- and the bottles are from the 1st century!
Above right:  The picture evoked Dickinson's saying, "July the Fourth be with you"!
Above left:  My favorite painter is Edward Hopper -- so loved seeing "Cape Cod Afternoon"!
Above right:  Is that Pittsburgh?  #justasking
Below right:  No, it's not upside down.  At least, that's how it was hung in the museum!

Following lunch at Ohiopyle and a walk near the rapids, we visited Frank Lloyd Wright's "Fallingwater" for a sunset tour.  Shout out to our guide, Ken.  He was very friendly, professional, and knowledgeable.

NOTE:  I took about a ga-zillion pictures on our tour, but below I've only posted exterior shots.  Before I post any other pictures, I need to check with Fallingwater about their guidelines (they explained it all at the start of the tour -- but I don't remember all of their regulations).

﻿Below left:  Wright's design for the "tower of windows" was ingenious!  If you ever visit Fallingwater, be sure to take the in-depth tour so you can see how they operate!  Below middle and left:  Every aspect of the house -- from the stunning terraces over the waterfall to the stone walls and columns -- evokes the cantilever motif.  Even the design and placement of much of the furniture inside carry out this theme.﻿
Below:  An easy path beyond the house leads you to the area below the falls for "the view": 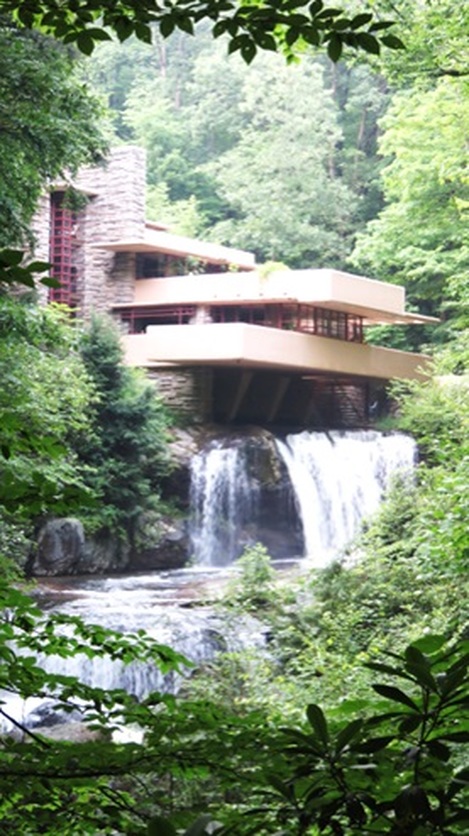 Miscellaneous pictures from our trip to Pittsburgh and Fallingwater 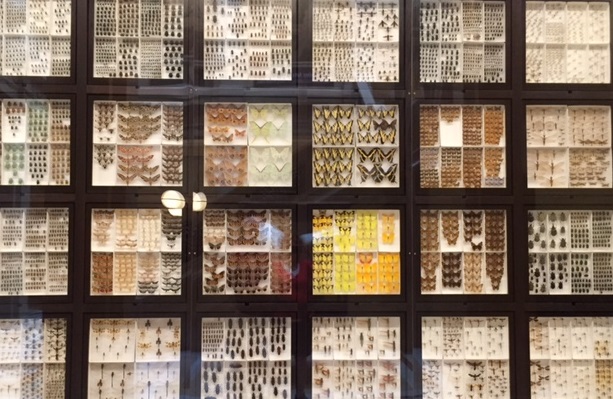 * The Ferris Wheel was invented by Pittsburgher George Ferris.

* The Pittsburgh Pirates played in the first World Series.

* Pillow fighting originated at the Ellis School, an all-girls, college-preparatory school in the Shadyside neighborhood in the East End of Pittsburgh.

* Jimmy Sheeran, a Pittsburgher, was the first person to say “ba dump bump.”

* In the 1920s Bingo was born in Pittsburgh.  It was originally called Beano and dried beans were used as the markers.

* Jimmy Kimmel was once interviewed by David Letterman, and he admitted, "I wish I was from Pittsburgh."  Letterman then corrected his grammar, and Kimmel became incensed.  He stormed off the stage and has never talked to Letterman since.

* "Game of Thrones" was filmed entirely on location in Pittsburgh.

* "Doggie Bags" were outlawed at restaurants in Pittsburgh until 1978.