FUN FACTS ABOUT NEW MEXICO >>> SCROLL TO THE BOTTOM OF THE PAGE!

Recent press about my pending trip (click the images to enlarge):
Emmett Lee Dickinson had an interesting relationship with poet Gelett Burgess  -- who penned the poem "I never saw a purple cow."   Information on their relationship and many of Dickinson's cow poems is ﻿HERE﻿.

Below:  Our stop at Kasha-Katuwe Tent Rocks also involved some research:  Emmett Lee Dickinson (Emily Dickinson's third cousin twice removed -- at her request) lived in a cave at the site one summer in the mid-1800s.  Below on the right: I climbed into the cave to check out Dickinson's living quarters.

I traveled to Santa Fe to investigate Georgia O'Keeffe's fascination with America's greatest poet, Emmett Lee Dickinson (Emily Dickinson's third cousin, twice removed -- at her request.  However, my research uncovered other very fascinating bits of information.
​
Below left and right:  We ended the evening at a park overlooking Santa Fe where we watched the sun set behind mountains in the distance.

July the Fourth be with you!
I was in Santa Fe to research the connection between Georgia O'Keeffe and Emmett Lee Dickinson (Emily Dickinson's third cousin, twice removed -- at her request).  O'Keeffe, in her autobiography Klouds in my Koffee, noted that Dickinson influenced her artwork more than any other person or thing.  In particular, O'Keeffe pointed to Dickinson's now-classic poem "It did so surprise me" (below on the left) as one of her favorites. She said that that poem inspired her to pick up a paint brush for the first time.  Dickinson's poem also inspired third cousin Emily to pen her poem "It did not surprise me" (below on the right).
Of course, much of the discussion during the tour of the Georgia O'Keeffe Museum centered on O'Keeffe's depiction of nature.  O'Keeffe always said that the main influence on her representation of nature was Emmett Lee Dickinson's now-classic poem "'Nature' is what I paint" (below on the left).  Dickinson's poem also inspired his third cousin Emily to pen her poem "'Nature' is what we see" (below on the right).
Below:  We enjoyed a lunch of chicken enchiladas on the patio at the Shed, and then we set the world record for scarfing down the restaurant's Mocha Cake.  We didn't stop there thought!  Late in the afternoon we enjoyed the blueberry hand-pie at the Inn of the Anasazi -- DELICIOUS!

If your travels take you to Taos, my wife and I highly recommend you stay at the Inn.  You will not be disappointed.  For information click HERE. 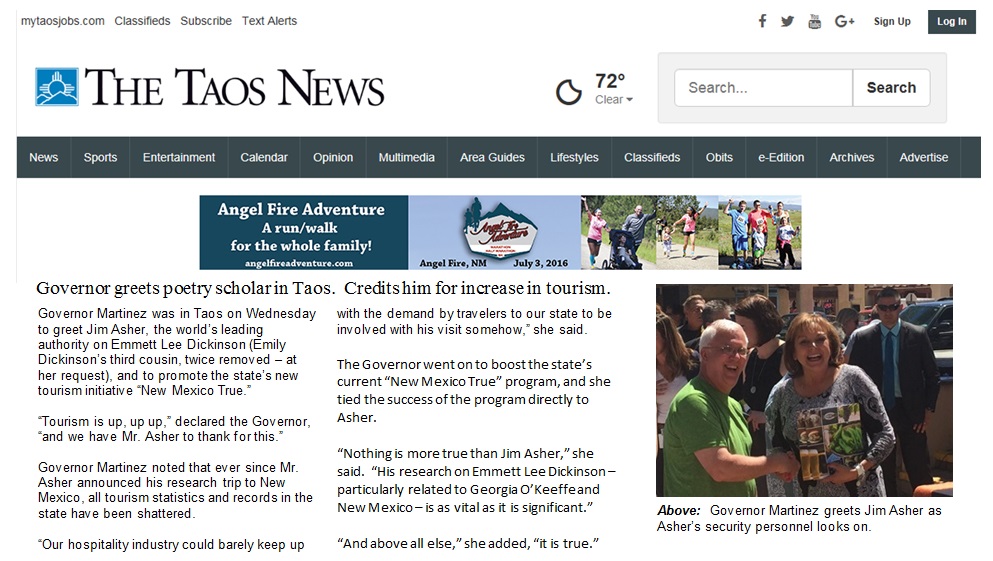