Below left:  Andy Warhol's boyhood home in Pittsburgh.  Warhol would often play in the yard with his two pet squirrels, Emmett and Lee.  Below center:  The carcass of Warhol's pet squirrel "Emmett" is on display at the Emmett Lee Dickinson Museum (above the coin-op Laundromat on Dickinson Boulevard) with special permission from the Andy Warhol Museum (near Galardi's 30 Minute Cleaners on Forbes Avenue).  Warhol's other pet squirrel, Lee, was crushed to death by a Pittsburgh Waste garbage truck.  Warhol was devastated.  He began a letter writing campaign and was joined by the North American Squirrel Association (NASA).  Together, they got Pittsburgh Waste trucks to include the slogan "Remember Lee the Squirrel" on the side of the trucks.  Below right:  A Pittsburgh Waste truck with the slogan, "Remember Lee the Squirrel."  CLICK THE IMAGES TO ENLARGE.
Pictured below:  Andy Warhol (at the far left) learned how to make Emmett Lee Dickinson's classic recipe for Corn Chowder as an intern in the Children's Kitchen at the Emmett Lee Dickinson School for Boys in Pittsburgh. 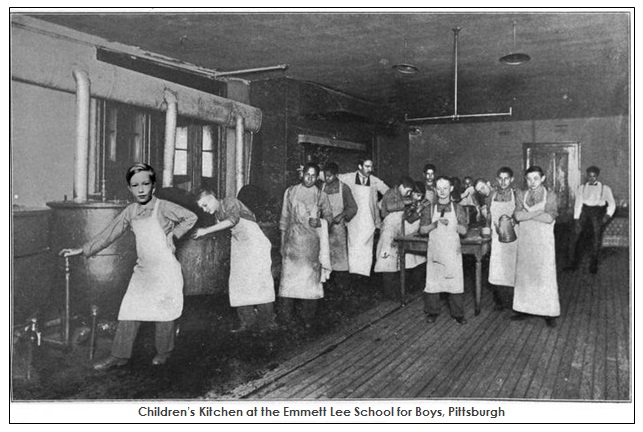 George Lucas, who attended the Emmett Lee School for Boys in Burbank, CA, was also a fan of Andy Warhol's art.  Warhol's paintings of soup cans below influenced Lucas in the character development of his Star Wars saga (the Chunky Wookie soup on the far right was said to be so chunky, that the Campbell's ad line for the soup was "May the forks be with you").
Pictured below left:  Western Penitentiary in Pittsburgh, Pennsylvania.  Pictured below right:  A rare photograph inside the Western Penitentiary showing Myrna "Miserable Myrna" Warhola in her prison guard uniform.  In his autobiography Fifteen Minutes of Fun, Andy Warhol said that he would often visit his aunt at the prison, and she would let him server the prisoners soup.
Below on the left:  Myrna Warhola's favorite poem by Emmett Lee Dickinson was "Consulting the stove top timer."  Below on the right:  Dickinson's poem inspired third cousin Emily to write "Consulting summer's clock."
Pictured below:  Andy Warhol paid tribute to his beloved aunt by painting a series of broth soups.
Below left:  The world renowned Culinary Institute of Pittsburgh and Western Pennsylvania.  Below center:  A rate photograph of Orpheus Warhola in the kitchen at Warhola Soup.  Below right:  Warhola Soup, open to this day in Pittsburgh's Strip District, draws long lines of satisfied customers.
Below:  Warhol painted a series of "angry soups" in honor of his Uncle Orpheus.
Below left:  Warhol dedicated his painting "One Old Opus" to his Uncle Orpheus (see the entry above dated Oct 6) who was a dyslexic.  The subtitle of the painting is "Noodle Soup for Dyslexics."  Below center:  Warhol's Uncle Orpheus said that his favorite poem by Emmett Lee Dickinson (Emily Dickinson's third cousin, twice removed -- at her request) was "I lost my Soup Spoon -- the other day."  Below right:  Dickinson's poem was one of the inspirations for third cousin Emily to write "I lost a World -- the other day!"
Pictured below left:  Warhola Land Shrimp Packing Company in Pittsburgh.  Pictured below right:  Andy Warhol painted "Oxymoron Tail Soup with Bitter-Sweet Large Shrimp" as a tribute to his Uncle Bartlomiej.
Left:  Warhol's "Chciken wtih Wlid Rcie," with its misplaced i's, pays homage to Pablo Picasso.  Center:  "Desert Cauliflower" calls to mind the flower paintings of Georgia O'Keeffe.  Right:  "ch(i)ck e nn oo dl e w(i)th (r ice" suggests the work of E. E. Cummings."  All three paintings were dedicated to Betty Bye.
In his high school years at the Emmett Lee Dickinson School for Boys in Pittsburgh, Warhol (known as "Andrew Warhola, Jr.") became disillusioned with school.  He said that the only things that interested him were soup, painting soup, and the poetry of Emmett Lee Dickinson (the school's namesake and Emily Dickinson's third cousin, twice removed -- at her request).  During this time of angst, Warhol was voted "Most likely to get stuffed into a locker" (above right).
Warhol paid homage to his days at the Emmett Lee Dickinson School for Boys in Pittsburgh with a number of paintings. "That's Using Your Noodle" (below far left) was dedicated to the school's Academic Bowl team.  "Little Lamb Stew" (below second to left) was painted in honor of one of the school's cafeteria ladies, Mary Mifflin.  "Ritalin" (below second to right) was dedicated to many of Warhol's classmates, and "Silent Pea" (below right) paid tribute to the school's swim team.
Pictured above at the far right:  Andy Warhol's 1st place trophy from the Allegheny County Science Fair for the "Chowder Head."  The trophy is currently on display at the Emmett Lee Dickinson Museum (above the coin-op Laundromat on Dickinson Boulevard) on loan from Pittsburgh's Andy Warhol Museum (near Galardi's 30 Minute Cleaners on Forbes Avenue).

Pictured below:  More of Warhol's technology-themed soup paintings.  The second from the right is called "Two peas in iPod."  The painting on the far right, "The Leek Squad" pays tribute to the fact that Emmett Lee Dickinson was the first to deliver "waiter, there's a fly in my soup" jokes.  "If there's a bug in your soup," quipped Warhol, in his autobiography Fifteen Minutes of Fun, " order the Leek Squad."
After he received the autographed photograph from Soupy Sales, Andy Warhol wrote back to the mega-star with additional questions and requests.  Soon the two were corresponding regularly.  Warhol was thrilled to learn that Sales was also a Dickinson aficionado, and that the star's favorite poem by Dickinson was "This is my Chowder to the world," the poet's ode to the concoction he invented, corn chowder.  The poem was also one of Warhol's favorites.

Below on the left:  Soupy Sales' favorite poem by Emmett Lee Dickinson, "This is my Chowder to the world."  Below on the right:  Dickinson's poem inspired "This is my letter to the World" by his third cousin Emily.
Below: Andy Warhol painted many different soups in his celebrity-themed series.  Although he never painted one in tribute to Soupy Sales, he dedicated the series to his idol.

On the left:  "Six Degrees of Bean with Bacon" inspired the trivia pastime known as "Six Degrees of Kevin Bacon."  Center:  Warhol said that "Marisa Tomato" was his cousin Vinny's favorite soup.  Second from right:  "What a Dumpling" was dedicated to Bette Davis.  Far right:  As child, Warhol was obsessed with the stop-gap animated characters known as Pokey and Gumby.
Below:  Although Warhol never found much success with his singing career, he painted a number of soups with a music theme. 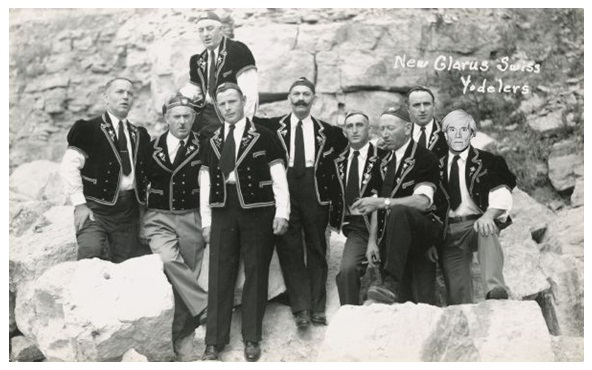 Below:  More of Andy Warhol's music-related soup paintings.  He dedicated "Keep the Beet" to Wankdorf Glarus, the leader of the New Glarus Swiss Yodelers.
Pictured above at the far right:  Andy Warhol's Royal Order of Non-Canadian Achievement, currently on display at the Emmett Lee Dickinson Museum  (above the coin-op Laundromat on Dickinson Boulevard) on loan from Pittsburgh's Andy Warhol Museum (near Galardi's 30 Minute Cleaners on Forbes Avenue).

After Warhol called the RONCA a "toilet," Canada rescinded the award, but Warhol refused to return it.  An outraged Prime Minister St. Laurent banned American television broadcasts in Canada.  This move was met with outcry on both sides of the debate.

At a press conference, Henri Patrick of the Quebec Chronicle-Telegraph yelled, “Give us American television, or bore us to death.”  Labatt Shatner of the Montreal Gazette shouted, “That’s redundant!  That’s redundant!."  This kerfuffle turned into a brouhaha.  It then grew to a fracas and ultimately a full-fledged donnybrook.

Alexander Milne Trebek, the Prime Minister’s press secretary and Sargent of Arms, tried to regain control of the situation and began yelling, “In the form of a question, please. In the form of question!”  That gave his son, Alexander Sterling Trebek the idea to create the game “Twenty Questions,” and later his son, Alexander Trebek, starred on the American game show Jeopardy.

TOMORROW:  More on Warhol's quest to treat and cure catarrh.
One of Warhol's inspirations to promote chicken soup (and hopefully end the spread of catarrh) was Emmett Lee Dickinson's poem "I never tasted Miso" (below on the left).  That poem is displayed prominently in the main lobby of the CCCP in La Tuque.  Dickinson's poem was one of the inspirations for third cousin Emily to write "I never saw a Moor" (below on the right).
Below left:  Emmett Lee Dickinson's poem "There is no frigate like a Bowl" lifted Warhol out of the depths of depression when he was fired as an illustrator for children's books.  Below right:  Dickinson's poem also inspired third cousin Emily to write "There is no frigate like a Book."
Below:  Although Warhol's career as an illustrator of children's books was brief, he continued to paint soup cans based on classic literature.
Below:  Some of Warhol's TV-series of soup cans were inspired by TV shows -- like "Chive Got A Secret" and "Chunky Muppet."  Others in the series inspired series.  For example, "Bean Me Up Scotty" was one of the inspirations for "Star Trek," and "Jump The Shark Fin" inspired an episode of "Happy Days."
Below:  Warhol painted a number of soups inspired by the alphabet. "Hieroglyphics," said Warhol, "was the first Alphabet Soup."  He also joked that "Alpha Obits" was "the most popular soup at the Dead Letter Office."
Below:  Some of the many sports-themed soup cans painted by Andy Warhol.  He dedicated many of them to his Youth Hunting Team coach, Jerry Lee Pervis, pictured at the left in the photo above.
Pictured above: A vintage Calvert Theater postcard has the Dickinson/Poe "Izzy Sharp & Moe" posters by the ticket booth.  Warhol's "Izzy Sharp & Moe" poster  (above at the far right) is currently on display at the Emmett Lee Dickinson Museum (above the coin-op Laundromat on Dickinson Boulevard) on loan from Pittsburgh's Andy Warhol Museum (near Galardi's 30 Minute Cleaners on Forbes Avenue).

Below:  Warhol painted a number of soup cans dedicated to the Dickinson-Poe duo of "Izzy Sharp & Moe."  Of course, "Raven Noodle," was a tribute to Edgar Allan Poe.  "Chicken On The Other Side Of The Road Noodle" paid homage to the comedy team's achievement for being the first to tell "Why did the chicken cross the road."  "Blue uncertain stumbling buzz" honored the fact that Dickinson and Poe were the first to tell, "Waiter, what's this fly doing in my soup" jokes.
Below:  Andy Warhol painted many soup cans with a Christmas theme.  When asked about "Zuzu's Petals," all Warhol would say is, "It's a wonderful soup."
Below:  Every Christmas, before the family dined on Starzec Soup, Andy Warhol would recite Emmett Lee Dickinson's poem "'Hope' is the soup with noodles," Grampa Bartosz' favorite poem.
Below:  Some of the many candy corn soups of Andy Warhol.
Emmett Lee Dickinson's "'Stew' is a fine invention" was one of Andy Warhol's favorite poems.  Every time he would recite it, though, he would add "What ever chicken soup can't cure, candy corn can."  Dickinson's poem is below on the left.  His poem inspired third cousin Emily to write "'Faith' is a fine invention," below on the right.