Donald Trump, the spokesperson for 2019's National Laundry Day,
came up with this year's theme:  "Be sure to keep your whites separate!" 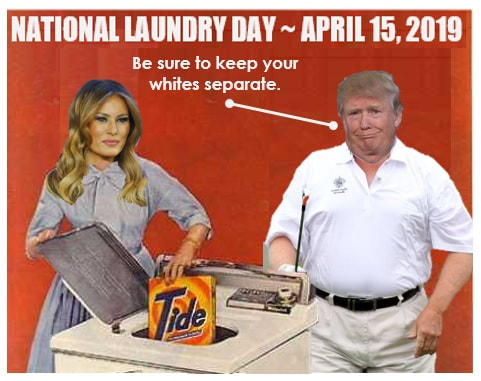 From 2018's National Laundry Day, when the theme was
​"Let's get the kids to do the laundry!"

For centuries, the Welsh affectionately called the English "Lloon dyrtes," and in English, the word morphed into "laundered."
​

﻿Washerst, Pennsylvania:  The Cleaning Capital of the World﻿

Washerst, PA, the home to Emmett Lee Dickinson (Emily Dickinson's third cousin, twice removed -- at her request) is often referred to as the "cleaning capital of the world."  Washerst is home to the internationally famous Washerst Dry Cleaning Academy and the International Institute of Laundry and Ironing Sciences.
More past adverts for National Laundry Day: