Featured Poems of the Week:﻿

The GOP is working hard to suppress the vote of people of color, and they are working equally hard to destroy our now-fragile democracy.  Now they are working actively to whitewash our history and keep the truth out of classrooms.

Texas limits the teaching a slavery and actually has textbooks that refer to enslaved people as "immigrants" or "workers."  Governor Abbott recently established the "1836 Project" to teach misinformation to students disguised as "patriotic education."  Oklahoma has outlawed the mention of white privilege.  The GOP has also worked diligently to silence the Pulitzer prize winning 1619 Project (the National Association of Scholars, a conservative advocacy group, has called on the Pulitzer Prize Board to rescind journalist Nikole Hannah-Jones' prize), and they are hoping to stop the spread of knowledge of the Tulsa Race Massacre (which -- in an attempt to shift blame unto the African-American community -- they call the Tulsa Race Riot).

​IN OTHER NEWS:  HAVE YOU SEEN MY NEW WEBSITE, "CODA"?  IT INCLUDES A LIST OF MY TOP 100 CLASSICAL MUSIC FAVORITES -- HERE.

​PLUS, ONCE PER WEEK, I LISTEN TO A PIECE I'VE NEVER HEARD BEFORE AND RATE IT (HERE).
LAST WEEK I LISTENED TO  MAX BRUCH'S CONCERTO FOR TWO PIANOS AND ORCHESTRA

THIS WEEK I WILL LISTEN TO ANTONIN DVORAK'S STRING QUARTET NO. 12 (THE "AMERICAN" QUARTET)

Emmett Lee Dickinson, Emily Dickinson's third cousin, twice removed -- at her request -- wrote many poems about days in -- and out of -- school.  He wrote poetry about snow days, HERE.  He wrote poems about Spring Break, HERE.  In addition, he wrote about the end of a school year and summer vacation in "When Bells stop ringing -- School -- will end," one of our Featured Poems of the Week.  Dickinson's poem inspired third cousin Emily to pen her poem "When Bells stop ringing -- Church -- begins," our other Featured Poem.

I had absolutely no idea how fragile our democracy is (is it too early to say "was"?) -- but I had no idea that one of our major parties, the GOP, would work so vigorously to destroy our government.  Oh, I've known for many years that their self-proclaimed monopoly on "family values" was a thin disguise, but I didn't think they would be complicit in a Russian-puppet's seditious attempt to over-throw our fair and free presidential election.   I didn't think they would back that same traitor's "big lie."  I didn't think that they would obstruct a bi-partisan commission to get to the bottom of that same con-man's coup attempt last January  -- most likely because a number of our current GOP senators and representatives were in on the planning for the insurrection. It is all truly shocking.

Trump must grin like an orange Cheshire cat every time the GOP covers up his crimes. He must thank God that MAGAts are so incredibly naive and stupid.

Due to the GOP's duplicitous dealings with one of history's most extreme con artists, I have posted Emmett Lee Dickinson's "Of GOP he asks one favor" as one of our Featured Poems of the Week.  Dickinson's poem inspired third cousin Emily to pen her pome "Of God we ask one favor," our other featured poem. 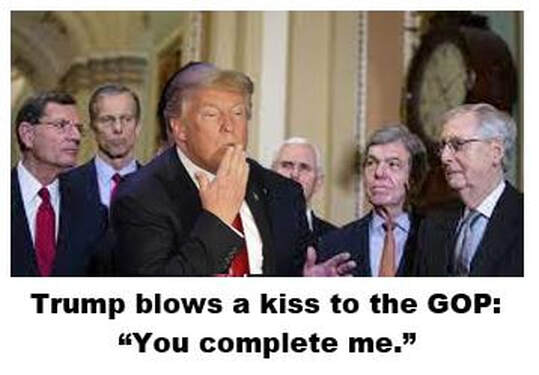