Pictured above left to right (click the images to enlarge):

Below on the left is Dickinson's poem "We never know he goes when he is going,"  the inspiration for the Beatles's hit "Nowhere Man."  The poem also inspired Emily Dickinson to write "We never know we go when we are going," below on the right.

Below, left to right:  Sousa's "Dickinson March," "This Is My March To The World," "Because I Could Not March In The Band, It Kindly Marched For Me," and "There Is No Frigate Like A March."

Above left:  The Blonde Assassin's debut album included her top hit, "Apparently With No Surprise.   Above middle:  The Blonde Assassin's second album included four Top Ten hits:  "To Any Happy Flower," "Accidental Power," "Measure Off Another Day," and the mega-hit, "The Sun Proceeds Unmoved."
And where, exactly, did Will Ferrell get the idea for "more cowbell"?  He drew inspiration from the last line of a poem by Emmett Lee Dickinson (Emly Dickinson's third cousin, twice removed -- at her request) entitled "I new saw a Poet cow."  For more information on this poem (including a connection to poet E. E. Cummings), click ﻿﻿HERE﻿﻿, and scroll down to the entry titled "It Needs More Cowbell."
Cow Appreciation Day is this week -- Wednesday, July 15th (information HERE).  While the traditional greeting for CAD is "Lang may yer lum reek"  (which means "May you live long and stay well!"), let us be the first to say that we hope your Cow Appreciation Day has lots "more cowbell"!
Below:  In an earlier album, Timberlake paid tribute to Jim Asher, the world's leading authority on Emmett Lee Dickinson (Emily Dickinson's third cousin, twice removed -- at her request).

Above left:  Quartz Contentment's debut album included the mega-hit "This Is The Hour Of Lead."   Above middle:  Quartz Contentment's top-selling album included his most popular singles, "After Great Pain" and "A Formal Feeling."  Above right:  Quartz Contentment's final album, "The Stiff Heart Questions" included the hits, "The Feet Mechanical Go Round," "Like A Stone,"  "Recollect the Snow," and "Then The Letting Go."
While Nashton Berg is considered the Father of Country Po'try, and his grandson Li'l Jimmy Dickinson founded the Grand Ole Po'try Radio Hour, it is Li'l Jimmy Dickinson's daughter Emmy Lee Dickinson who established country po'try as a bona fide art form.  Her country poems are recognized around the world as masterpieces of country po'try, and her works are often compared to the works of her distant cousin Emily Dickinson.

Below left, middle and right:  Emmy Lee Dickinson based her albums on her poetry, her father's or her grandfather's poetry, Emmett Lee Dickinson's poetry -- or, as with these three albums, the poetry of her distant cousin, Emily Dickinson.  She recorded the album shown in the middle with her brother, Dallas Dickinson.
Bizet had been commissioned by the Buffalo Opera Company to compose a work on America's westward expansion, and his new opus, the story of a strong-minded corn planter by the name of Cedric de Becque, was met with critical acclaim.  The work was hailed for its progressive themes, including one of interracial love between the farmhand Jonas Cable and a native-American, Princess Snow Pea, as told in the haunting love song, "Corn is High."  The opera also included the world-famous quartet, "The Farmer and the Cowman Should Share A Bond of Mutual Affection."

Due to their shared passion for corn, Dickinson and Bizet forged an instant friendship.  Later, Bizet wrote another opera, "Carmen," based on the marriage of Emmett Lee Dickinson to an escaped convict named Carmen Seville.  Details are recounted in Great American Poems ~ REPOEMED (info HERE). 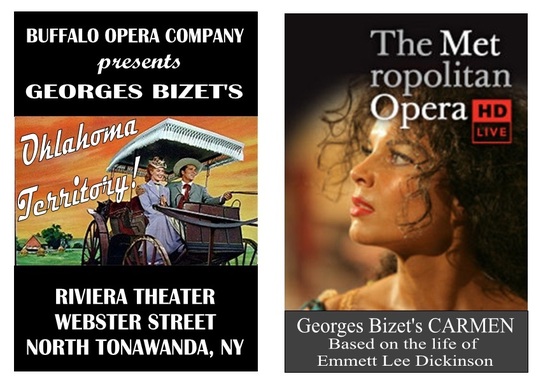 Below far left:  The Walker sisters of Mount Misery (Leia is on the top; Vada is on the bottom).  Below left, right, and far right:  Posters from operettas by brothers Gilbert and Sullivan Arthur.  For additional information on the Walker sisters and Gilbert & Sullivan Arthur operettas, click HERE (scroll down to the entry titled "DÄHRTH").
Below:  Emmett Lee Dickinson's poem "Why should we hurry -- why indeed?" inspired Bruce Springsteen to write "Born to Run."  Dickinson's poem (on the left) also inspired his third cousin Emily to write a poem by the same name (on the right).
For more information on Abigail Wellwood-Barnwell and ABBA, click HERE.  Scroll down to the entry titled ABBĒ
Below left and middle:  Two of Rufus Schweinfahrt's top-selling albums, "Death Is A Dialogue Between The Spirit And The Dust" and "As By The Dead We Love To Sit."  Below right:  For a time, Rufus Schweinfahrt faded from the music scene, but his disco album "Absence Disembodies (So Does Death)" took him back to the top of the charts!  "Absence Disembodies (So Does Death)" won seven Grammy awards for Schweinfahrt, more than any of his other albums.
Below left:  The debut album of The Horses' Heads included their mega-hit "Toward Eternity."  Below middle:  The Horses' Heads seventh album, "Only Gossamer My Gown," won an unprecedented 18 Grammys.  Below right:  For their thirteenth album, The Horses' Heads introduced themselves to the world as Clem and Diesel Stankard.  Their first hit as transgenders, "My Labor & My Leisure," remained at the top spot on the Top 40 chart for 36 weeks.  They also appeared on a reality TV show called "Meet The Horses' Heads."  The show ran for seven seasons, won countless Emmys, and at the time, garnered the highest ratings for the E!  network more than any other show.
Pictured below on the left:  Emmett Lee Dickinson aficionado Irving Berlin.  For more information on Irving Berlin's devotion to Dickinson, click HERE (scroll to the bottom of the page).  Below on the right:  The famous duet between Emmett Lee Dickinson and Emily Dickinson in Irving Berlin's rollicking musical "Em'ly Get Your Pen."
All things Emmett Lee Dickinson (poetry, museum stuff, Washerst facts and figures, etc.) © 2013, 2014, and 2015  by Jim Asher