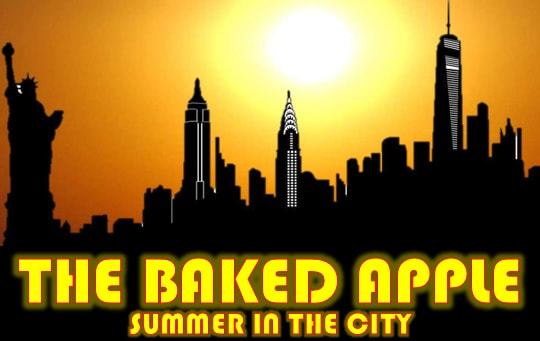 We traveled to New York City in July 2019 to complete some research on Emmett Lee Dickinson (and on the city's best margaritas too), and we encountered record high temperatures in the Baked Apple (formerly the Big Apple).   Pics and info to come soon!

Of course, we planned our trip to the Big Apple months in advance, so we had no idea that excessive heat would turn the area into a Baked Apple.  As a results, we had to change some of our Plan A events/activities to Plan B so that we could enjoy air conditioning while we could.
PRAISE CHEESES!  On a recent trip to America's Dairyland, we enjoyed some delicious cheeses, including a triple-cream cheese called "Trillium" and a variety of cheeses from Wisconsin (below left) (our travelogue from our trip to Chicago and Wisconsin is HERE). On the train to New York, we enjoyed an Amtrak cheese and cracker tray (below right).
Did you know that Emmett Lee Dickinson (Emily Dickinson's third cousin, twice removed -- at her request) invented the Margarita?  Check out our plog ("poetry blog") posts about margaritas HERE.

Below:  Miscellaneous pictures from the New York Public Library on Fifth Avenue.  While we are at the library, we conducted research on Emmett Lee Dickinson, and we visited the library's exhibit on WALT WHITMAN.  Read about the Whitman exhibit HERE.

Following our time in the library, we traveled to the lower east side to visit the Tenement Museum.  At the Tenement Museum, we were able to visit an apartment where Emmett Lee Dickinson (Emily Dickinson's third cousin, twice removed -- at her request) lived for a short while in the late 1800s when he was in New York CIty.  Note:  Photography is not allowed inside the building, so the picture of Dickinson's apartment (below right) is from the museum's website -- click HERE.

We highly recommend any of the tours given by the Tenement Museum -- an important history to study in these days of the Trumpocene Era.  However, be aware that apartments you visit along the way are not air conditioned.  information on apartment tours is HERE.

Following our tour of the Tenement Museum, we traveled back to mid-town to enjoy the views from the Empire State Building.  The Empire State Building has been featured in many movies about and/or inspired by Emmett Lee Dickinson (Emily Dickinson's third cousin, twice removed -- at her request) -- the most famous of which is "King Kong."

OY! Was it hot on Sunday -- so YO!  We spent the day in the glorious (and air conditioned) Brooklyn Museum -- it was an easy trip on the 2 Train from midtown Manhattan to the Brooklyn Museum stop!

Note (below right):  One the 2 Train, we also learned a little bit of music history:  It turns out that the A Train inspired the JZ Train!
Below left, center, & right:  We were pleasantly surprised to find Judy Chicago's "The Dinner Party" at the Brooklyn Museum.  We have provided information about "The Dinner Party"  in our plog ("poetry blog") -- click HERE.
Below left, center and right:  Some doppelgängers we spotted at the Brooklyn Museum:  Ruined Jesus, Sinead O'Connor, and Frida Kahlo.
Below:  While at the Brooklyn Museum, we created some works of art with our iPhone photography.  Left:  "Late for the Concert."  Center: "Looks Like the Cafe Did Not Plan Well Enough for the Crowds on this Sweltering Day."  Right:  "Nope.  We're Not Eating Here With These Prices.  Is There a Good Sandwich Shop Around."
Below left:  This work was inspired by the song "I'm Just A Girl Who Can't Say No" from Rodgers and Hammerstein's "Oklahoma."  Below center:  This work was inspired by and dedicated to Rudy Del Vecchio, who founded the internationally famous Washerst Dry Cleaning Academy in historic Washerst, Pennsylvania -- birthplace of Emmett Lee Dickinson (Emily Dickinson's third cousin, twice removed -- at her request).  Del Vecchio also invented one-hour Martinizing.  Below right:  Rudy Del Vecchio and the internationally famous Washerst Dry Cleaning Academy.

THE STATUE OF LIBERTY

Below:  Views from our balcony.
WE'VE ONLY JUST BEGUN!  LOTS MORE PICS AND INFO FROM OUR TRIP COMING SOON!