Did you know that "haiku" is the Japanese word for bowling?

During one of his tours of Japan, Emmett Lee Dickinson was bowling, and he developed the idea for a short poem of 17 syllables after he bowled a 7-10 split:  seven syllables between two lines of five syllables (or "10 split").

He called this new form of poetry a "haiku," the Japanese word for "bowling."
FUN FACTS:  Emmett Lee Dickinson also invented a five-line love poem called a "Volley" patterned after the scoring conventions for tennis.  The first line would always begin with the single word "Love."  The second line would contain 15 syllables, followed by a line with 30 syllables, and the final line would have 40 syllables.  Unlike the haiku, Dickinson's "Volley Poem" never caught on.

After Emmett Lee Dickinson had the brainstorm for the poetic form known as the haiku, he wrote to several friends -- including Henry David Thoreau -- and to his third cousins, Austin, Lavinia and Emily Dickinson.  The oldest known surviving haiku (the first haiku ever written?) is on a postcard Dickinson sent from Japan to  his third cousins in Amherst, Massachusetts.
Emily Dickinson was so inspired by her third cousin's work, that she went bowling at Amherst Lanes (now Emily Dickinson Lanes).  She bowled several games, and then sat and wrote "This is my letter to the World."
FUN FACTS:  Many poets have bowled and composed poetry at Emily Dickinson Lanes in Amherst.  Maya Angelou wrote "On the Pulse of Morning" there after bowling a perfect game.  Rita Dove wrote "Testimonial" there after bowling her personal best, a game of 227.   Nikki Giovanni, Sandra Cisneros, Susan Snively, and many others have reported that they have written major poems after bowling  games at the historic bowling alley.

FUN FACTS:  For a complete look at the medicines, salves and ointments invented by Emmett Lee Dickinson, click HERE.

November 7:  I Owe You A Haiku

Below:  Edward Dickinson could not pay back his original U.O.Me (and others) so he agreed to build and name a dormitory after Emmett Lee Dickinson on the campus of Amherst College.  The dormitory, though, was so lavish, that in the early 1900s, the college's president, Alexander Meiklejohn, took it over as the president's residence. 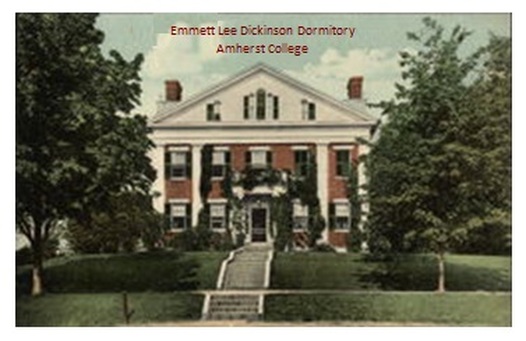 Below left:  Emmett Lee Dickinson, weary after all of Edward Dickinson's requests for loans, wrote the haiku, "I am poor once more."  Below right:  Dickinson's haiku inspired third cousin Emily to write "I never lost as much but twice."

November 9:  Now and Then

November 10: The Power of Three?

Emmett Lee Dickinson's haiku "Spacious bog for sale" was also a bit autobiographical.  In a terrible business decision he bought what was advertised as "lake front property."  It ended up being hundreds of acres of what was known at the time as the Washerst Bog.  He later sold the area to a real estate developer for a loss.  The developer eventually filled in the bog and the area today is the site of Dickinson Boulevard in historic Washerst.   Below left:  Washerst Bog, property once owned by Emmett Lee Dickinson.  Below right:  Dickinson Boulevard in historic Washerst  on the site of the former Washerst Bog.

One of the most notorious scandals to rock the world of Poetry was in the late 1800s when Emiko Dikytinson (see the entry above dated 11/16) was able to "convince" a publisher to publish a book of her "haikus" even after she was banned from writing haikus by the Haiku Validation Center and the International Federation of Haikus.
Emmett Lee Dickinson, Emily Dickinson's third cousin, twice removed (at her request) and the originator of the haiku, was furious with Yoshiyuki Senryu, both for trying to alter the parameters of the haiku, the poetic form he created, and for backing Emiko Dikytinson's unidentified publication of "best haikus."  He wrote a haiku about Senryu called "Fame is a stink bug" (below left and center).  His haiku was one of Emily Dickinson's inspirations for her poem "Fame is a bee" (below on the right).

Dickinson's haiku below on the left inspired third cousin Emily to write her poem "Ample make this bed," below on the right.

Dickinson's haiku below on the left inspired third cousin Emily to write her poem "I noticed People disappeared," below on the right. 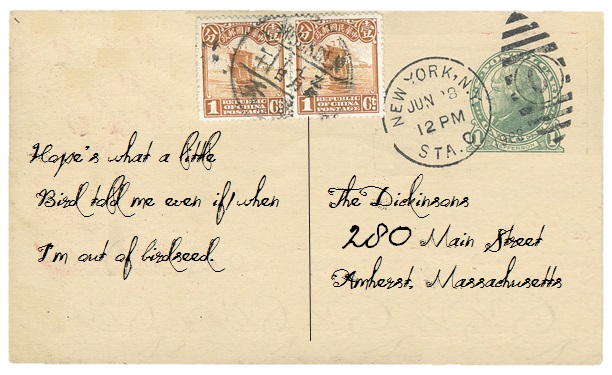 Did you know that writing haikus is the third most serious addiction in the world?  The Top 5 Addictions are as follows:

Not only did Emmett Lee Dickinson (Emily Dickinson's third cousin, twice removed -- at her request) invent a corn planter that is still used by farmers today, he also invented Daylight Savings Time.  On Dickinson's drawing  of his corn planter (pictured below on the left), he wrote a haiku in the top left corner that alludes to standard time -- after the first experiment with Daylight Savings ended.

Emmett Lee Dickinson (Emily Dickinson's third cousin, twice removed -- at her request) was the first to identify  the condition known as "writer's block."  He labeled the problem after various correspondences with his third cousin where she whined about being "blocked" from ideas to write about.  Emmett Lee would always try to encourage Emily, as he did with the haiku pictured below.

November 25:  A Haiku is Such a Little Thing

When Emily Dickinson died, a small box was found under her bed that was dedicated to her relationship with Emmett Lee Dickinson (her third cousin, twice removed -- at her request).  The box included dolls of herself and her third cousin, a pen with which she wrote many poems, and many other mementoes.  The box also included a handkerchief with a haiku written on it in Emmett Lee Dickinson's handwriting.
The handkerchief haiku (below on the left) inspired Emily Dickinson to write "It's such a little thing to weep" (below on the right).

Not only did Dickinson invent the haiku, he also established as the official art form associated with the holiday.  He wrote more poems (mostly haikus) about Thanksgiving than any other poet.

Pictured below:  Three of Dickinson's more than 800 haikus about Thanksgiving.